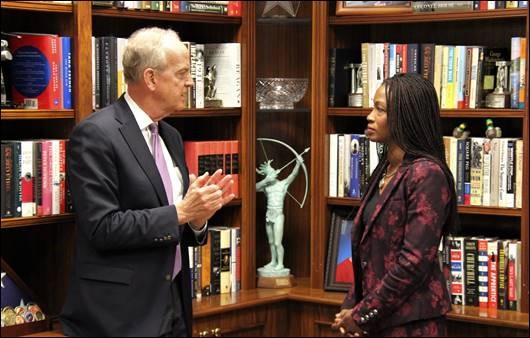 Posted at 14:56h in Regulatory by Editorial Team
0 Likes

Today, U.S. Senator Jerry Moran (R-Kan.) met with Aurelia Skipwith, the nominee to be the Director of the U.S. Fish and Wildlife Service (FWS) and the current Deputy Assistant Secretary for Fish, Wildlife and Parks at the Department of the Interior. During the meeting, Sen. Moran raised concerns regarding the water rights dispute surrounding the Quivira National Wildlife Refuge (NWR).

“In my meeting with Ms. Skipwith, I explained the need for farmers and ranchers to be able to utilize groundwater in the basin and the importance of agriculture to the regional economy,” said Sen. Moran. “I am pleased that Ms. Skipwith committed to working with local stakeholders to find a voluntary solution to satisfy the Quivira water impairment before requesting that the Kansas Department of Agriculture (KDA) move forward with an administrative order to regulate junior water rights. This solution should include augmentation of Rattlesnake Creek, voluntary water conservation efforts and maximizing use of the water the refuge currently receives. I look forward to continue working with Ms. Skipwith to pursue commonsense solutions to this issue that will impact Kansas producers and the regional economy.”

While water rights are generally handled at the state and local government level, the impairment claim directly involved a federal agency, the FWS. The FWS holds a senior surface water right near the bottom of Rattlesnake Creek for its Quivira NWR. After an investigation, KDA’s Division of Water Resources (DWR) concluded in 2016 that Quivira NWR’s water supply has been impacted by upstream junior groundwater pumping.

On July 30, 2019, KDA rejected the latest Local Enhanced Management Area proposal put forth by the Groundwater Management District #5 intended to resolve the impairment. Subsequently, KDA has communicated with junior water rights holders – primarily farmers and ranchers – in the Quivira NWR stating their intentions to move forward with regulations limiting irrigation and other water usage. These regulations will only be implemented if FWS – the senior water rights holder – makes a formal request for action to settle the impairment.