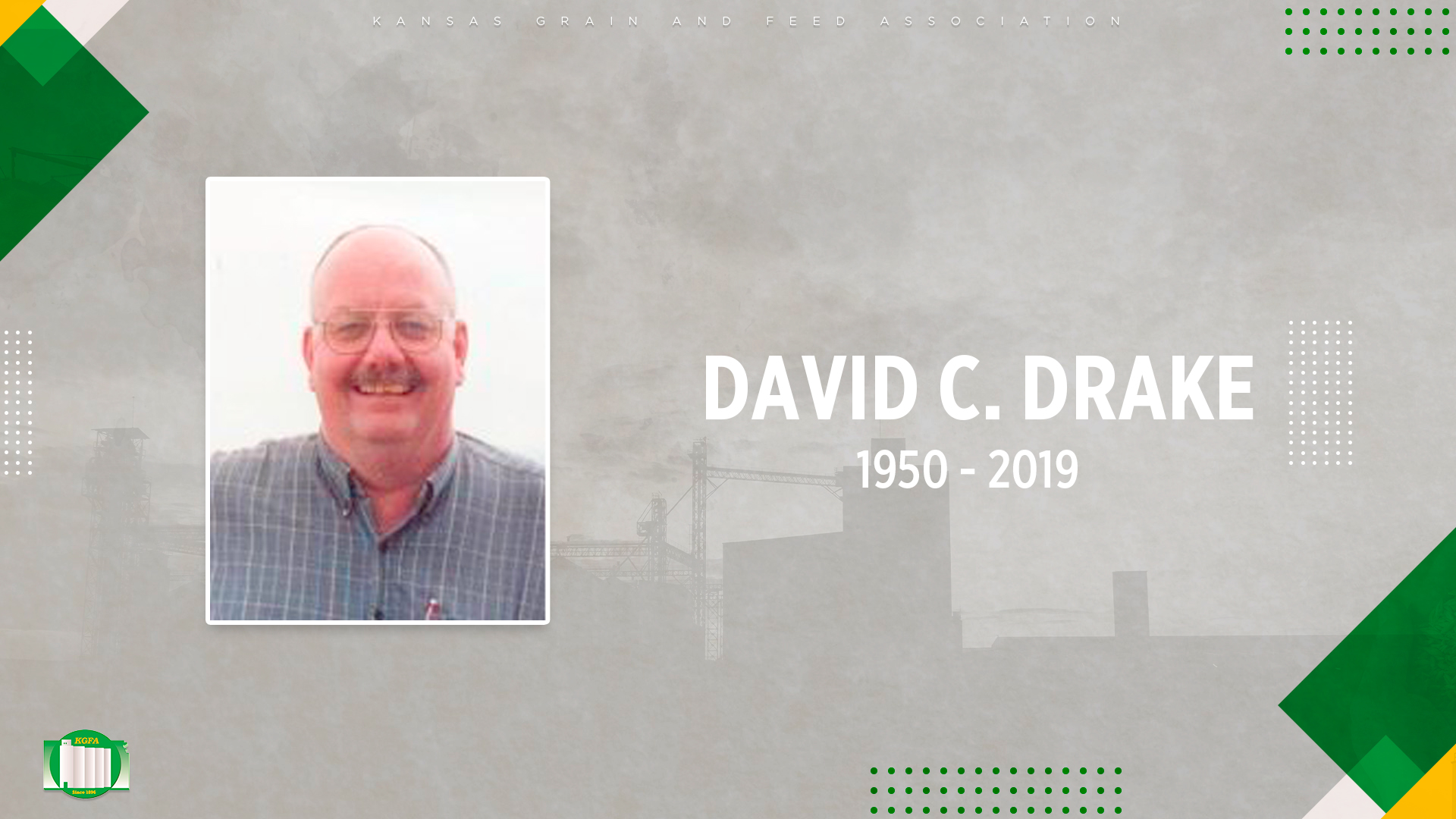 Posted at 15:16h in Industry News by Editorial Team
0 Likes
David C. Drake, age 69, of Thayer, NE died Monday, August 19, 2019 at UNMC Buffett Cancer Center in Omaha, NE.
Drake was a longtime member and sponsor of Kansas Grain and Feed Association, as well as a steadfast supporter and exhibitor of the Kansas Agri Business Expo.
He was born April 27, 1950 to Eugene “Gene” and Vivian (Broton) Drake at Devils Lake, North Dakota. He attended and graduated High School at Lakota, ND (Go Raiders!) Dave while on a basketball scholarship attended and graduated from NDSU in Bottineau, ND with a degree in Forestry. On January 20, 1971, Dave was drafted into the Unites States Army and proudly served as a Company Clerk during the Vietnam War era, until his honorable discharge on January 19, 1973. Dave then obtained his Bachelors of Science degree in Animal Science in February 1976 from NDSU in Fargo, ND (Go Bison!). Following graduation, he managed a meat company. In 1977 Dave began his elevator repair career spanning 42 years and for the last 14 years he owned his own company, Drake Inc. On April 1, 1971 he was married to Jamzella Kovarik in Lakota, North Dakota. They later divorced. On December 29, 1979, Dave was united in marriage to Barbara Pherson in Fargo, ND.
Dave enjoyed the great outdoors, hunting, fishing, horses, and hobby farming. In his youth he spent may days afield with his father and grandfather in the sloughs of ND in pursuit of ducks, geese, jackrabbits, and gophers for bounty. In 1985, on Lincoln Creek he got his infamous “Big Buck” (that is in every family picture). He traveled to Wyoming for a horse back wilderness elk hunt in 2016. Then on a South African safari hunt in 2017.
His favorite fishing holes were Devils Lake, canals in Nebraska & Lake Erie for large walleyes. He also enjoyed meat processing, sausage making, reading, playing cards such as 7-point pitch, attending trade shows to promote business with his tribe of road warriors, and gathering with friends and family. Throughout life, Dave never met a stranger. Although he was a transplant to Nebraska for the mild winters Dave became a Husker fan “Go Huskers!”
Dave was a Charter member in 1981 of the York Eagles 3990. He held many offices, sponsored meals, and supported numerous fundraising efforts. Also, he was a member of the Elks Lodge #1024 and an American Legion member.
Dave was involved in many State and National organizations relating to the Grain and Feed industry with GEAPS being the largest.
He is survived by his wife Barbara Drake of Waco, daughters Christine (Ronald) VanAusdal of Cheney, WA and Bobbie (Brian) Kommes of Howard, SD, sons Derek Drake of Lincoln, NE and Dustin (Staci) Drake of Waco. VanAusdal grandchildren: Hunter, Richard, Christopher, Jordan, Sara, Emelie, and Kommes grandchildren; Cody, Kayla, and Katie, and his dog Smoky.
He is also survived by his sisters Maribeth (Scott) Bradley of Devils Lake, ND and Dawn Drake of Grand Forks, ND, sister-in-law Holly Pherson of West Fargo, ND. Several nephews, and one favorite niece Megan Estenson.
He was preceded in death by his parents, brother James “Chip” Drake, parents-in-law, and brother-in-law Leon Pherson; favorite horse Drifter and hunting dogs: Major, Cat, Pepper, and Bo.
Memorial services are scheduled for 10:00 AM, Friday, August 30, 2019 at St. Peter Lutheran Church, Gresham, NE with the Reverend Lee Seetin officiating. Inurnment with full military honors will follow in Zion Lutheran Cemetery, Thayer, NE. With light lunch to follow at Gresham Community Building.
It was Dave’s wish to be cremated, and there will be no viewing. In following Dave’s wishes however, the family will greet friends and family Thursday, August 29, 2019 from 4-7 pm at Dave’s Man Cave at their home. The family asks to please BYOB along with your favorite stories about Dave. Camo and Hunter Orange welcome.
Memorials may be directed to UNMC Buffett Cancer Center, Hope Lodge of Omaha, York 3990 Eagle’s Scholarship Fund, or please make a blood or platelet donation in memory of Dave.