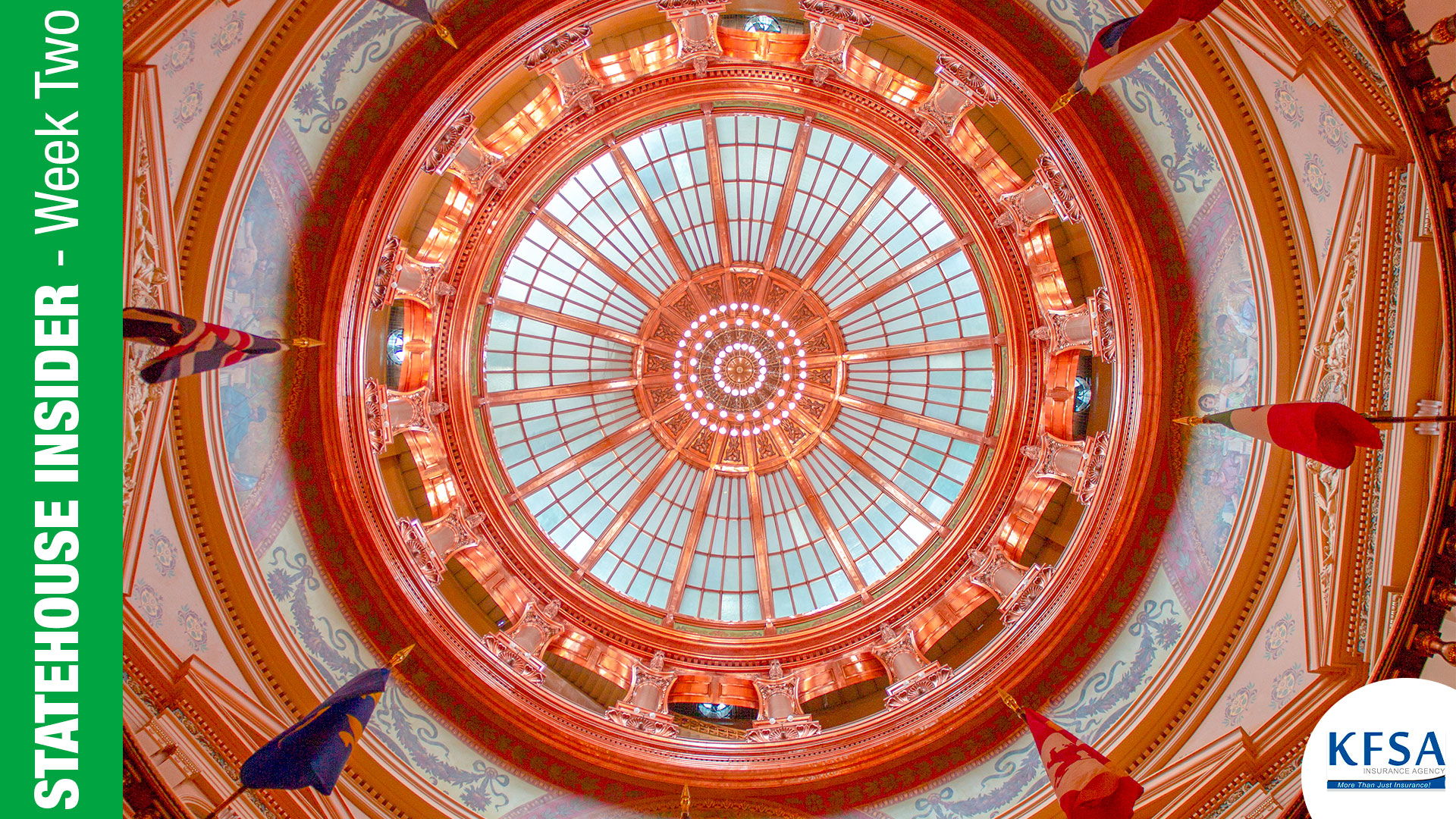 Posted at 08:11h in Advocacy by Editorial Team
0 Likes

The second week of the 2019 Kansas Legislative Session kicked off on Tuesday, Jan. 22, following the observation of Martin Luther King, Jr. Day. Lawmakers continued to ease back into the swing of things, with many informational briefings taking place in committee meetings throughout the shorter-than-usual week. Kansas Grain and Feed Association’s government affairs staff continued to monitor the happenings at the Statehouse affecting our industry.

On Wednesday, Kansas Grain and Feed Association testified before the House Committee on Agriculture in support of House Bill 2001, a bill which would extend the sunset of the Kansas Ag Remediation program from July 1, 2020 to July 1, 2030. The bill also realigns the funding for the program by reducing environmental assessments on grain elevators and pesticides product registrants, and by increasing the current assessment on fertilizer product registrants, as a reflection of the part of the industry receiving most fund reimbursement. Finally, the bill reduces the maximum allowable fund balance from $5 million to $3 million. Kansas Agribusiness Retailers Association, Kansas Cooperative Council and Kansas Department of Health and Environment also submitted testimony in support of the bill. Further discussion and committee action on this bill is scheduled for Wednesday, Jan. 30.

On Wednesday, Jan. 23, Senate President Susan Wagle appointed herself as Chair of the newly created Select Committee on Federal Tax Code Implementation. President Wagle created this special committee during the first week of session to specifically address Senate Bill 22, a bill which returns revenue to individual and corporate taxpayers that the state otherwise expects to gain from changes to the federal tax code following passage of the 2017 Federal tax cuts and jobs act. The committee will hold hearings on Senate Bill 22 next Tuesday and Wednesday, and is scheduled to take final committee action on the bill on Thursday. Kansas Grain and Feed Association will be submitting testimony in support of Senate Bill 22, which includes the following provisions:

The House Committee on Utilities this week received a report from the Kansas Corporation Commission on the causes behind the increased rates for electricity in Kansas as compared to surrounding states, and an explanation for why Kansas energy rates increased substantially between 2008 and 2017. In addition, House Bill 2080 was introduced in the Committee, a bill which mirrors Senate Bill 24. Both of these bills would amend existing law concerning recovery by electric utilities of transmission-related costs. The bills would limit the return that a utility may recover to the actuarially assumed investment rate of return established by the Board of Trustees of the Kansas Public Employees Retirement System.  This limitation would not apply to costs to use transmission facilities not owned by the utility. The bill would also exclude the utility seeking to implement a transmission delivery charge from any other manner of cost recovery from its retail customers.

On Thursday, Jan. 25, 2019, a coalition of business and consumer groups, known as the Kansas Industrial Consumers Group, asked the state’s utilities to immediately reduce rates by 10 percent. The group, which has been working with lawmakers since last year to lower electric rates, asked the Legislature to commission a rate study separate from the one just completed by the Kansas Corporation Commission. The group wants a study that will provide solutions for reducing Kansas electricity rates to a level that is more competitive with neighboring states.

On Tuesday, Jan. 22, 2019, the Senate Committee on Ways and Means held a hearing on SB 9, which would transfer $115 million from the state general fund into the state retirement system (KPERS) during FY 2019 to pay for reduced state contributions from prior years. In FY 2016, the legislature withheld $97.4 million in contributions from the KPERS system, to be repaid with interest in fiscal year 2018. However, the legislature did not make that payment. Governor Laura Kelly’s plan – released last week – would re-amortize the state’s liability to the state’s retirement system until 2048 in order to free up about $145 million to fund other state services now.

Local Impacts of the 2018 Farm Bill

House Rule Changes to Increase Transparency
On Wednesday, the Kansas House passed House Resolution 6004 which makes changes to chamber rules to require 70 votes to pull a bill out of committee or up for floor debate. This change would give the majority party more control over which bills are heard in committee, emerge from committee, get to the House calendar, and come up for floor debate. The House Resolution adopted other changes as well, as part of a transparency effort, including:  a change to require a sponsor’s name on all bills, where bills introduced at the request of special interests must be identified; and, adding a provision to require the identification of “gut and go” bills – those bills which have had their original contents entirely removed and then replaced with new language. passed on a final action vote.

Members of the Task Force:

Through the first two weeks of the session, the House Rural Revitalization Committee is in the mode of gathering information from economic development experts before introducing any legislation to address assisting rural Kansas. Clare Gustin of Sunflower Electric Power Corporation and Heather Morgan, of Project 17, both agreed there is a link between the declining rural population and the inability to find sustainable jobs in those communities. Each presentation highlighted the need for local civic engagement, and an openness to accept federal funds for improving infrastructure. The rationale being, even if a newly-found business closes its doors a year after formation, the improved infrastructure of roads, and utilities still exists in the location for a new business to take its place.

· HB 2006: A bill requiring the Department of Commerce to create a database for the disclosure of economic development incentive program data, tax credit programs and certain property tax exemptions. A hearing on this bill is scheduled in the House Committee on Commerce Labor and Economic Development on Thursday, Jan. 31st at 1:30 p.m., in room 112-N.

· HB 2043: A bill concerning the review of tax credits, tax exemptions and economic development programs. A hearing on this bill is scheduled in the House Committee on Taxation on Wednesday, Jan. 30th at 3:30 pm in room 112-N.

· HB 2062: A bill relating to the applicability of conditions for operating recreational trails. A hearing on this bill is scheduled in the House Committee on Agriculture on Wednesday, Jan. 30th at 3:30 pm in room 582-N.