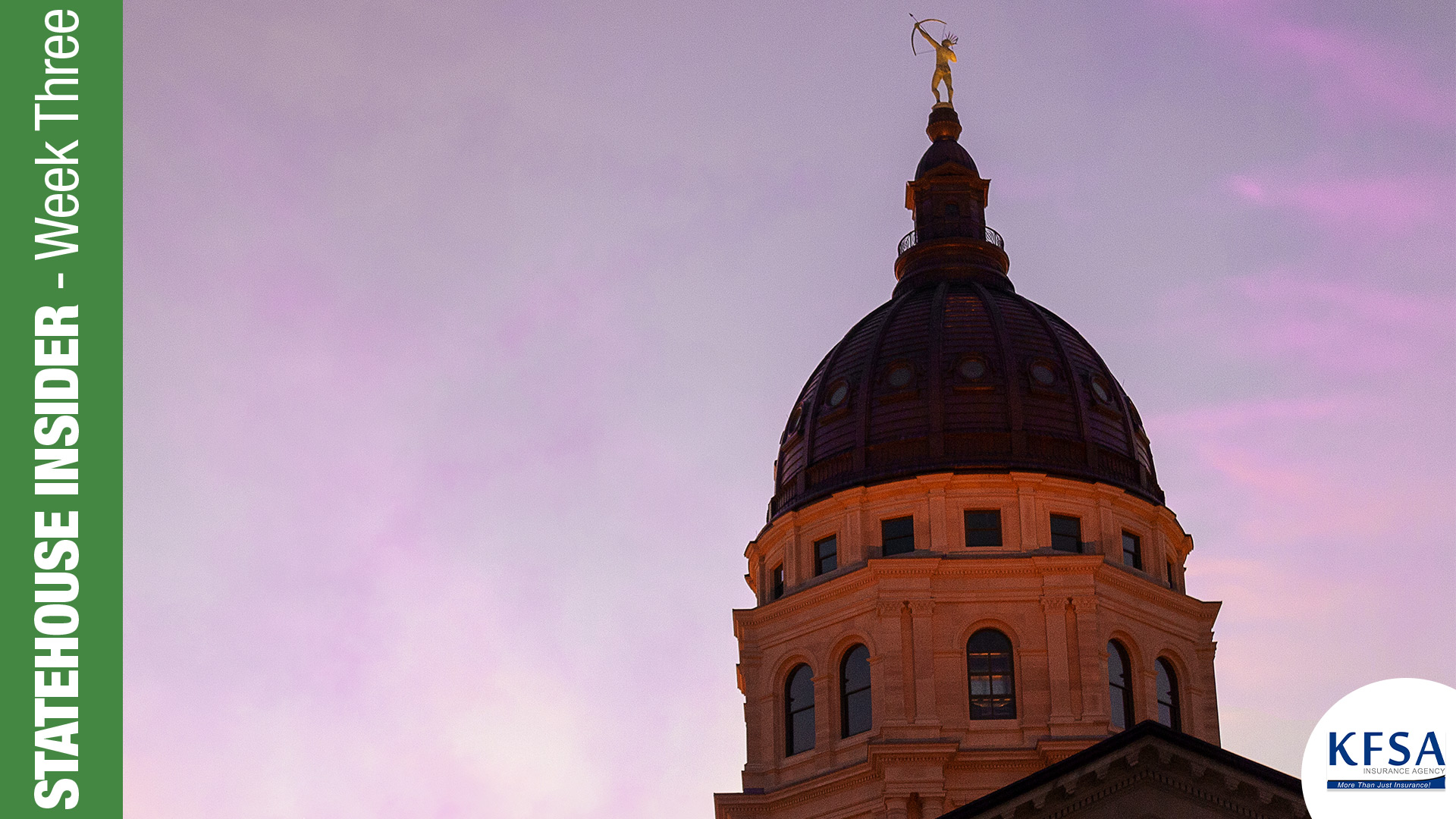 Posted at 06:51h in Advocacy by Editorial Team
0 Likes

The third week of the 2019 Kansas Legislative Session started on Monday, January 28. Things began to heat up at the Capitol, with lawmakers discussing a key tax bill. In addition to welcoming members to Topeka for our annual Legislative Action Day, your government affairs staff continued to monitor the happenings at the Statehouse affecting our industry.

On Wednesday, Jan. 30, 2019, Kansas Grain and Feed Association welcomed nearly 100 of its members to Topeka over the lunch hour for its Legislative Action Day. The annual event allows members of the agribusiness industry to see government in action and meet with elected officials. Those in attendance enjoyed hearing speeches from Lieutenant Governor Lynn Rogers and Speaker of the House Ron Ryckman Jr. Read more about the event here.

On Wednesday, Jan. 30, 2019, the House Committee on Agriculture moved House Bill 2001 out of committee favorably for passage. This bill extends the sunset of the Kansas Agricultural Remediation program from July 1, 2020 to July 1, 2030. The bill also realigns the funding for the program by reducing environmental assessments on grain elevators and pesticides product registrants, and increasing the assessment on fertilizer product registrants, in order to better align the fees with the applicants to the fund. The bill also reduces the maximum allowable fund balance from $5 million to $3 million. Kansas Grain and Feed Association, Kansas Agribusiness Retailers Association, Kansas Cooperative Council and Kansas Department of Health and Environment submitted testimony supporting the bill.

On Thursday, Jan. 31, the Select Committee on Federal Tax Code Implementation moved Senate Bill 22 out of committee favorably for passage after adopting an amendment with clerical changes. This bill would return revenue to individual and corporate taxpayers that the state otherwise expects to gain from changes to the federal tax code in the 2017 Federal tax cuts and jobs act. The act taxes foreign earnings of corporations that are “deemed” to be repatriated. Kansas Grain and Feed Association submitted testimony in support of the bill which now moves to the full Senate for consideration this week. While certain Republican Senators look to pass the bill to prevent a state income tax increase on Kansas taxpayers, Senate Democrats have pushed back on the bill in order to be able to keep and spend the so called “windfall.” The tax increase to individuals is estimated at more than $50 million annually, and the taxes on corporations is estimated at $130 million.

On Thursday, Jan. 31, SB 69 was introduced which seeks an independent study of electric rates in Kansas. This issue will be one of broad interest in the capitol this year, as individual and corporate rate-payers alike are seeking answers for the high cost of utility rates in Kansas and looking for ways to reduce those costs to become more in line with our neighboring states. A broad-based alliance known as Kansas for Lower Electric Rates (KLER) is gathering support for this study.

On Thursday, Jan. 31, HB 2114 was introduced in the House Committee on Taxation which would authorize counties to impose a severance tax on quarries for limestone severed from the earth at the rate of $1.00 per ton. Funds from the tax would be deposited into a limestone severance fund and then returned to the counties in which they were generated. Tax-payer groups at the statehouse are likely to oppose this new taxing authority for counties that would have the potential to be expanded to cover other industries in the future.

On Thursday, Jan. 31, the House Committee on Commerce, Labor and Economic Development held a hearing on HB 2006. This bill would require the Kansas Department of Commerce to collect data on state economic development initiative benefit recipients, of $50,000 or more annually, and place that information on a public database. In addition to economic development programs (HPIP, PEAK, STAR bonds, ANGEL investor tax credits), such reportable benefits would also include tax credits programs, and property tax exemptions. The website would include the total state investment in each of these programs and the estimated return on investment for each program. Information would be available for each program, each recipient, and each county. The website would not include information that is confidential under the economic development programs. A similar bill passed the House in 2018 on a vote of 114-7.

On Monday, Jan. 28, 2019, the Senate Committee on Ways and Means received a briefing on a report by the Transportation Vision Task Force, a 35 member, quasi- legislative body that traveled the state during the summer and fall of 2018 to hear from the public on what projects should be included in the next state transportation plan. As the current T-WORKS projects nears its end in 2020, the legislature will be drafting a new plan with spending initiatives for transportation infrastructure. In recent years, funds were diverted from T-WORKS projects to cover other state budgetary needs. According to the report, this diversion resulted in the delay of 21 major T-WORKS projects at a value of $500 million. Much of the conversation of the Task Force focused on the completion of those 21 remaining projects. The scope of the next transportation plan will be limited by the available funding, and the Task Force has focused on possible funding schemes. The state department of transportation (KDOT) testimony before the Task Force indicated that the current funding mechanisms (motor fuels tax, and sales tax apportionment) have not kept pace with current transportation funding needs. According to the department, a combination of $500 million annually for modernization, plus $100 million for preservation projects, would be necessary to “return the system to a steady state.” Conferees to the Task Force requested projects estimated at $7.5 billion, including economic development projects, expansion projects, and modernization projects that improve motorist safety. KDOT testimony before the Task Force upped the ante on this request by stating that total construction needs for transportation projects exceeded $18 billion.

On Wednesday, Jan. 30, the Senate Committee on Ways and Means moved SB 9 favorably for passage. This bill would transfer $115 million from the state general fund into the state retirement system (KPERS) during FY 2019 to pay for reduced state contributions from prior years. Governor Laura Kelly’s plan – released last week – would re-amortize the state’s liability to the state’s retirement system until 2048 in order to free up about $145 million to fund other state services now.

On Jan. 29, the House Committee on Taxation held a hearing on HB 2063, a bill which would allow for an exemption to the so-called property tax lid on counties and local units of government by allowing a city or county to absorb another taxing entity and increase its own budget by the corresponding amount of the taxing authority being absorbed, without requiring the city or county to take the budget increase to a vote of the taxpayers.

On Monday, Jan. 28, Interim Secretary of Revenue Mark Beshears briefed the House Committee on Taxation on the issue of an internet sales tax in Kansas. In June of 2018, the US Supreme Court entered a decision on the Wayfair case, where the Court overturned a previous ruling of the Court which had prohibited states from collecting a tax on internet sales by retailers who did not have a physical nexus to that state. States may now require collection of tax on internet sales based on an economic nexus to the state alone. The department estimates that this new tax could generate $30-50 million annually. While 80 percent of the new revenue would come from the top 100 online retailers, 80 percent of those retailers are already remitting a sales tax to Kansas on those sales. Half of the total projected revenues could come from the third party marketplace facilitators. The committee will look to draft and introduce legislation this session on these sales.

On Monday, Jan. 28, 2019, the House Committee on Rural Revitalization received a briefing on the historical trends and current status of property tax assessments in Kansas from the Kansas Office of Legislative Research, and the Kansas Department of Revenue. In 1991, school district general fund property tax levies ranged from 9 mills in one county to up to 97.6 mills in another. In 1992, the legislature amended school finance law which substantially altered school district property taxes. The 1992 legislation established a uniform general fund mill levy for school in each county – currently at 20 mills. The committee focused on the harm that increased property taxes cause to rural Main Street and other property tax payers. Recent legislative policy to lower income taxes has shifted more of the overall tax burden onto property taxes.

· HB 2062: on Wednesday, Jan. 30 the House Committee on Agriculture held a hearing on this bill which would clarify that certain statutory requirements for maintenance of a recreational trail apply to the “responsible party.”

· 19rs0522: introduced in the Senate Committee on Agriculture on behalf of the Humane Society, on Wednesday, Jan. 30, this bill would create a new section of law regulating the transport of sick pet animals such as cats and dogs.

· 19rs0149, introduced on behalf of Governor Kelly on Tuesday, this bill would expand Medicaid in Kansas.