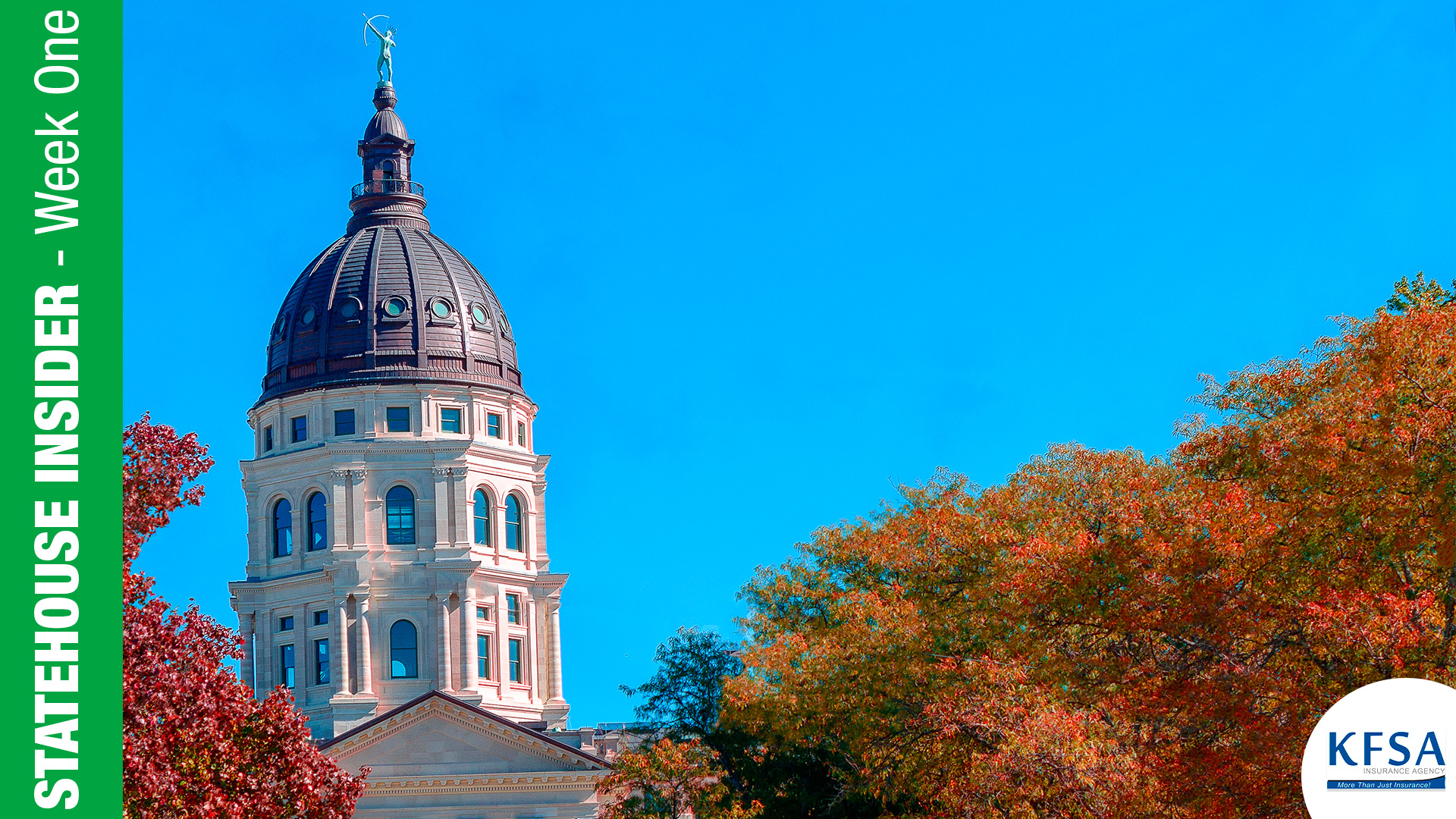 Posted at 06:29h in Advocacy by Editorial Team
0 Likes

It was a ceremonious first week for the 2019 Kansas Legislative Session as newly-elected Governor Laura Kelly was sworn in on Monday, beginning a new era of executive branch leadership. For the most part there were no heavy-hitting pieces of legislation proposed in the session’s first week as most lawmakers eased back into the swing of a six-month life in Topeka. Despite a rather slow week, Kansas Grain and Feed Association’s government affairs staff monitored the happenings at the Statehouse and produced a concise rundown of issues important to the grain and feed industry below.

On Wednesday of this week, Governor Laura Kelly gave her first State of the State address. Included in the Governor’s address and proposed budget were various new spending items: expansion of Medicaid in Kansas, increasing funding for K-12 education, rebuilding the state’s foster care system and a pay raise for state employees. The Governor called on the legislature to carve out K-12 spending from the general budget to expedite that portion of the budget. Rather than seeking a tax increase to pay for these priorities, the Governor proposed to restructure (reamortize) payments to the state’s Kansas Public Employees Retirement System (KPERS) over the next 30 years. While such a move would free up $145 million right now, it would push out the date that the state would be able to cover its unfunded liability by 2050 – currently scheduled to be met by 2025. Stretching out the repayment period under the governor’s plan would cost the KPERS system about $7 billion in interest. In addition, the Governor’s budget recommends keeping $200 million of the $300 million that had been transferred from the highway fund into the state general fund.

Passage of the 2017 Federal Tax and Jobs Act increased the standard deduction taxpayers were allowed on their federal taxes. However, passage of this act also increased corporate income tax paid by some Kansas businesses. For that reason, the Kansas Senate Tax Committee spent three days this week discussing Senate Bill 13.

This bill would amend the Kansas tax code to allow Kansas taxpayers to itemize their state returns even if they took the standard deduction on their federal return (referred to as “decoupling” from the federal tax code). There was discussion on a possible amendment to the bill that would ensure Kansas businesses did not experience a large tax increase based on the recent federal changes. Kansas Grain and Feed Association testified in support of this legislation in a hearing on Thursday, stating that other states have already moved to preclude this new taxation on corporations.

There were concerns by some members of the committee of voting on a bill without knowing the true fiscal effect (cost) of the bill. Others indicated that they had not been contacted by companies asking about passage of the bill. A similar bill, Senate Bill 22, was filed in the Senate on Thursday afternoon. On Friday, Senate President Susan Wagle (R-Wichita) referred Senate Bill 22 to a newly created special committee, the “Senate Select Committee on Federal Tax Code Implementation.” It is not yet known who will serve on this committee. There were late-in-the-week threats that Senator Caryn Tyson (R-Parker) might be removed as Chair of the Tax Committee. Additionally, should this bill be sent to Governor Kelly, there are concerns that the Governor will veto the bill.

This week, a bill (House Bill 2001) was introduced and referred to the House Committee on Agriculture that will amend the agricultural and specialty chemical remediation act (known as the ‘KARB’ program). Originally passed into law in 2000, this act created the remediation reimbursement program and remediation fund to allow for financial reimbursement to eligible persons for expenses incurred during the performance of agricultural chemical remediation. Initially, this program equally reimbursed agricultural chemical sites and fertilizer remediation sites. However, in recent years, the majority of remediation sites seeking program reimbursement are for fertilizer remediation. The changes set forth in this bill are intended to realign the funding stream for the program with that reality. In addition, the bill extends the sunset on the program from July 1, 2020 to July 1, 2030, and reduces the maximum fund balance to $3 million in order to right-size the program to its current need. Kansas Grain and Feed Association and Kansas Agribusiness Retailers Association will testify in support of this bill at a hearing scheduled for Wednesday, Jan. 23.

Kansas has the highest electric rates in the Midwest. For that reason, both the House and Senate Committees on Utilities received reports this week from power companies and the Kansas Corporation Commission on the cause of the high rates as compared to surrounding states, and an explanation for why Kansas energy rates increased substantially between 2008 and 2017. Additional studies may be requested as small and large industrial rate payers alike are seeking answers to the high cost of electrical power in Kansas. Kansas Grain and Feed Association will be closely following this issue as it evolves. Some of the reasons stated for the increased energy costs in Kansas include:

Various Kansas commodity commissions (corn, sorghum, wheat, soybeans and sunflowers) presented their annual reports to the Senate and House Committees on Agriculture. A brief description of each report is listed below.

Kansas Soybean Commission: Kansas harvested 197 million bushels of soybeans on 4.8 million acres in 2018. This was down from 5.1 million acres in 2017. The 2018 crop has a value of $1.7 billion. Approximately 60 percent of Kansas soybeans are exported. There is an increased use of soybeans as fish feed in aquaculture. Soybean producers continue to battle herbicide tolerance/resistance in weeds.

Kansas Sorghum Commission: Much sorghum is still being stored across the state. Kansas produced 228 million bushels in 2018, up 13 percent from the previous year. China still consumes about 71 percent of Kansas grown sorghum, so Chinese involvement affects a lot of the commodity price. Sorghum is used as feed for hogs and ducks and in a popular Chinese fermented beverage.

A new House committee tasked with producing ideas to spark growth in rural Kansas met for the first time last week. Chaired by Representative Don Hineman (R-Dighton) the committee likely will be a platform for informational presentations by anthropologists and economic experts this session. In its first week, the committee held informational briefings on rural demographics, rural development and challenges and rural tourism development.

Other bills on our radar this week: