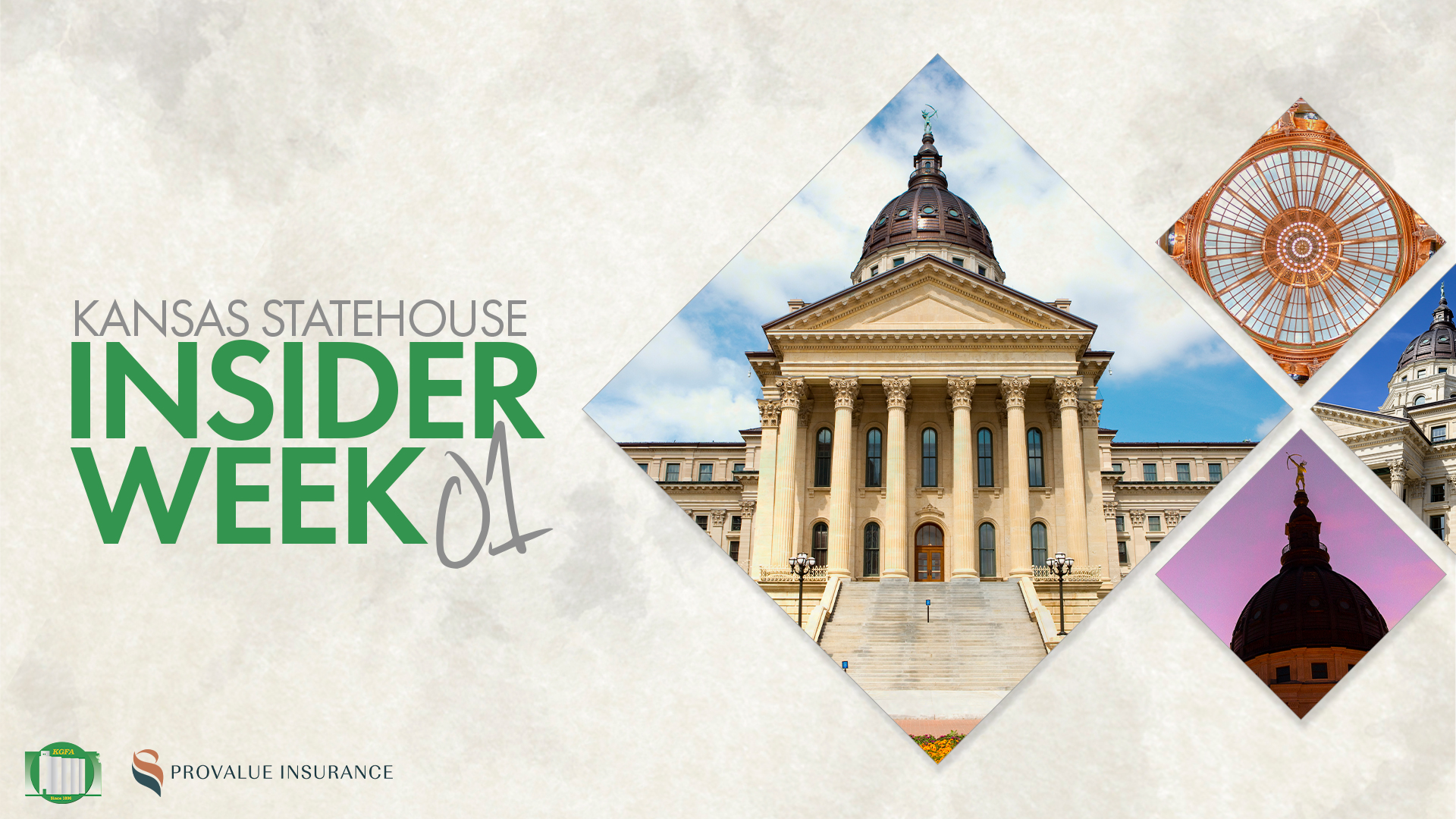 Posted at 10:25h in Advocacy by Editorial Team
0 Likes

2020 Legislative Session Begins
The 2020 Kansas legislature gaveled in on Monday January 13, 2020. It was a busy week in the capitol building which saw a State of the State address by Governor Laura Kelly, the retirement of a state senator and the swearing in of a new member of the House, and the introduction of dozens of new bills. Heading into the 2020 legislative session, several controversial issues have been gearing up for prime time. Expect to see the most attention on how to expand Medicaid, approving the next 10-year transportation plan, comprehensive tax reform, and discussion on a proposed constitutional amendment concerning the right to abortion. Fortunately, the decades-long battle over school finance should not be a central issue due to the passage of new funding legislation last year.

Governor Kelly Gives Annual Address
In her State of the State address, Governor Kelly presented her priorities for the year which included, inter alia, the passage of Medicaid expansion, the next 10-year transportation plan, passage of an internet sales tax, the lowering of food sales tax ($53 million proposal), and addressing high property taxes. In order to pay for these budget priorities, the Governor has once again proposed reamortization of the state’s pension plan (Kansas Public Employee Retirement System, or “KPERS”) – a move which would free up approximately $130 million for the annual budget, but would cost taxpayers approximately $4.4 billion in additional long-term interest payments. Republican leadership in the House and Senate have already stated their objections to this proposal.

Don’t Look Too Far Down the Road
Due to significant tax increases in 2017, receipts to the State General Fund are projected to be $1.2 billion over receipts in 2018, and $550 million ahead of projections for the end of the current fiscal year. However, even with this increased tax revenue, budget projections are once again in the red again in just two years. This is due, in large part, to hefty mandatory payments to KPERS, budgeted spending increases on K-12 education, increased spending on healthcare and social services, and the movement away from borrowing from the state transportation fund. Going forward, the legislature will need to either make significant budget cuts or raise taxes to cover the shortfall.

Property Tax – Escrow of Increase in Valuation When Appealed
Last session, House Bill 2340 was passed out of the House Committee on Taxation. This bill would prohibit county treasurers from distributing the portion of property taxes that are in dispute for certain residential and commercial property (above a certain threshold), when the property tax is paid under protest, until the appeal process is final. Your Association lobbied in support of the bill last year, and met with opponents of the bill over the summer interim to seek compromise language to amend the bill to address their concerns. The bill is now before the full House, and looks to move forward with the agreed amended language.

Pesticide Waste Disposal Program
This week, House Bill 2432 was introduced and referred to the House Committee on Agriculture. The bill will amend the agricultural and specialty chemical remediation act (known as the ‘KARB’ program). The changes in this bill will use up to $50,000 from the remediation fund each year to fund a Pesticide Waste Disposal Program which will be managed by the Kansas Department of Agriculture. Kansas Grain and Feed Association and Kansas Agribusiness Retailers Association drafted this legislation and requested its introduction. A hearing on the bill will likely be scheduled on Tuesday, January, 28.

Senate Utility Committee Receives Phase I of Electricity Rate Study
Last session, following multiple hearings on the high cost of Kansas utility rates, the legislature passed Substitute for Senate Bill 69, a bill which required a comprehensive study of Kansas public electric rates, in order to assist the legislature in finding ways to lower rates and make Kansas more competitive. On Tuesday, January 24, 2020, members of the Senate Utilities Committee received a copy of Phase One of the study. The Committee is considering actions to take in response to the study. Your Association will be closely following the issue and meeting with a coalition of industrial energy stakeholders.

Kansas Attorney General Requests Introduction of “Public Litigation Coordination Act”
On January 15 in the House Committee on Judiciary, the Kansas Attorney General requested introduction of legislation that would require local units of government to coordinate with the Attorney General in order to enter into a contract for legal services on a contingency fee basis. The bill is intended to allow for the state to exercise greater control over large suits such where the state – or local units of government – are the plaintiffs, rather than allowing each subordinate unit of government to enter into independent lawsuits. The bill represents good public policy for both the state and for industry.

KDHE to Move Forward with Hazardous Chemical Spill Reporting Bill
During the 2019 legislative session, the Kansas Department of Health and Environment (KDHE) introduced Senate Bill 153, which would allow the Secretary of Health and Environment the authority to define, in regulation, reportable quantities and timelines for reporting spills of hazardous chemicals, and to harmonize those quantities and timelines with federal standards. The bill would also direct the Secretary to create a one-call system for spill notification. In addition, however, the bill would have granted KDHE the authority to assess civil penalties for failing to timely report spills of hazardous chemicals. Your Association joined with other stakeholders in testifying in opposition to the level of civil penalties and other parts of the bill. Over the summer interim, your Association met with KDHE and worked on an agreed amendment to the bill addressing our concerns. We anticipate the bill, now in the Senate Committee on Agriculture and Natural Resources, to be amended and moved forward.

Vocational Training Bill
Last Session, the House Committee on Commerce, Labor and Economic Development advanced a bill out of committee that would allow students participating in unpaid, school-based vocational training and apprenticeship programs to be covered by the school district’s liability insurance. The bill required some re-tooling this year. Your Association worked with the Committee Chairman and other interested stakeholders to make some necessary changes to the bill. It will be reintroduced soon in the committee for a new hearing.

Bill Filed to Remove Certain Recent Gains on Reining in Agency Regulations
In 2018, your association joined with other interested stakeholders to successfully pass House Bill 2280, a bill which amended the Rules and Regulations Filing Act to place heightened scrutiny of fiscal notes on proposed state agency regulations, and also placed new hearing requirements on agencies for very large and costly regulations. This week, House Bill 2411 was introduced. The bill would roll back some of the changes made by House Bill 2280. A hearing on the bill is scheduled in the House Committee on Federal and State Affairs next Thursday, January 23, 2020, at 9:00 a.m.

Scrap Metal Theft Reduction Act
Following many meetings and hearings over the scrap metal theft reduction act last session, the legislature finally passed a bill which created the scrap metal data repository fund, and authorized the Kansas Bureau of Investigation to administer the scrap metal theft program. Your Association joined a group of interested stakeholders in supporting passage of the bill. Already this session, however, a bill has been introduced to re-open the act and make additional changes. We will monitor closely and weigh-in on the conversation to ensure the act remains intact.

Rails To Trails Subcommittee Presents Report
During the 2019 summer interim, a subcommittee of the House Committee on Agriculture met with stakeholders across the state to discuss possible issues with the Kansas Rails to Trails programs, including inadequate trail maintenance. On January 16 the Subcommittee provided its report to the full Committee. The report indicated that no changes to the current law were identified, but that discussions between landowners and trail proponents should continue. The subcommittee opined that while the trails benefit rural communities, there are also relevant and legitimate concerns by landowners adjacent to the trails.

Unsecured Ag Silage
On January 15 Senate Bill 267 was introduced and referred to the Senate Committee on Transportation. The bill would clarify that, in certain circumstances, a violation of a statute requiring secured vehicle loads would be a “traffic infraction” rather than a “class C misdemeanor” as is currently in statute. The purpose of the bill is to ensure that drivers of unsecured loads of silage grain are cited with traffic infractions rather than class C misdemeanors. This bill was introduced by Senator John Doll. Your association will support the measure.

Appointments: On January 16 the Senate confirmed Earl Lewis as the Director of the Kansas Water Office, and reconfirmed Doug Jorgensen as the State Fire Marshal.