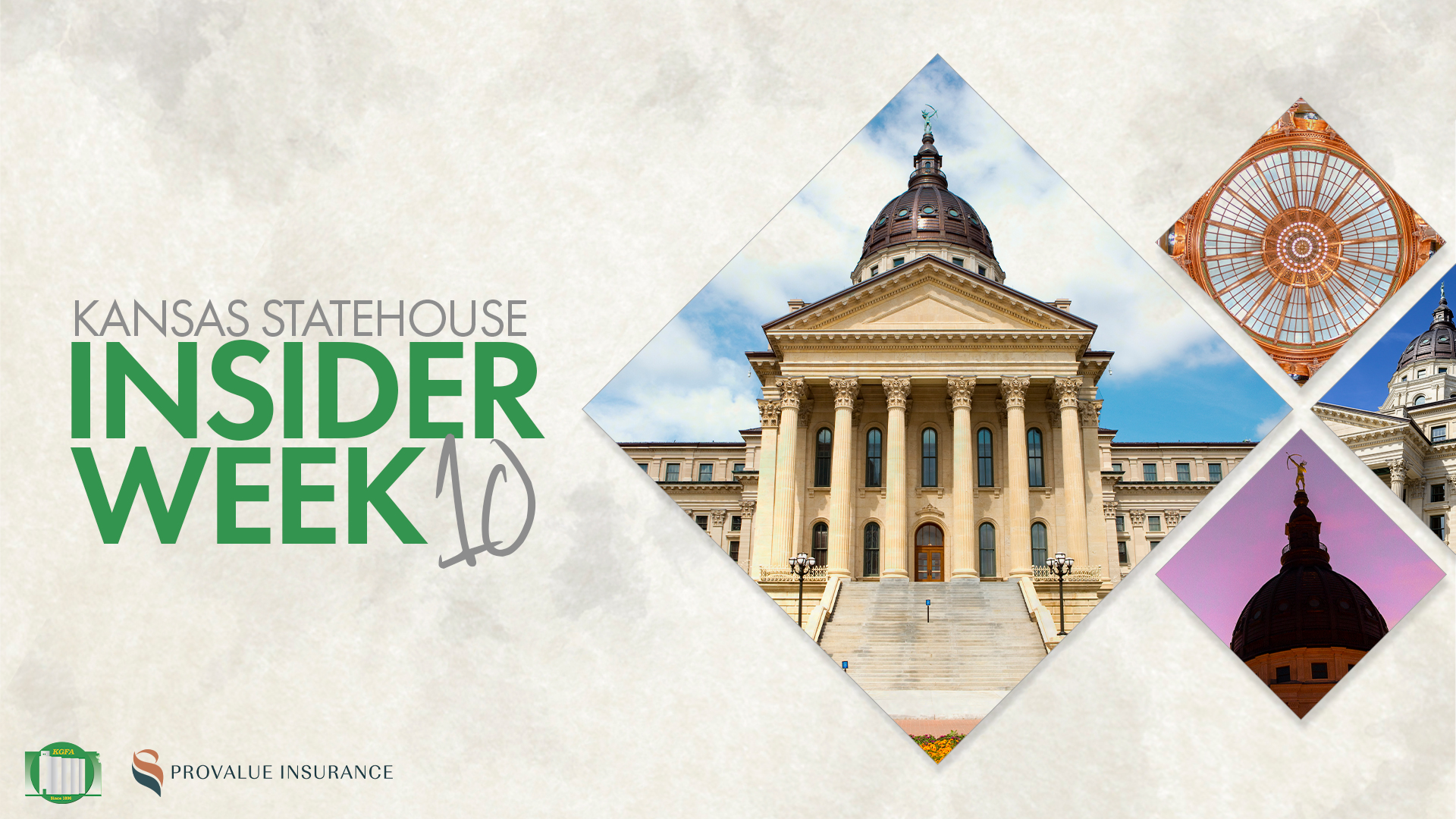 Posted at 06:51h in Advocacy by Editorial Team
0 Likes

On Thursday evening, the Legislature wrapped up regular session business, adjourning nearly a full week before its regularly scheduled adjournment date as concerns of COVID-19 exposure continue to grow. This shortened session prevented final legislative action on many bills. However, the adjournment resolution is scheduled to bring the legislature back on Monday, April 27, and allow one final week of possible action on bills — all of which is dependent on the broader COVID-19 pandemic.

On Thursday, March 19, following multiple rounds of conference committee meetings between the House and Senate, the legislature passed, and sent to the Governor for consideration, Conference Committee Report (CCR) on Senate Bill 66, which contains the approved state budget for fiscal years 2020 (remaining), and 2021. The budget contains appropriations for $6.4 million in funding for the State Water Plan Fund, and also contains a proviso limiting the regulatory authority of the Kansas Dept. of Health and Environment from increasing fees on industries to fund its Bureau of Air Quality. The agency had previously stated its intention to increase fees on Class I and Class 2 air emitters up to an additional $1.7 million in 2020. Additional proviso language extends the sunset on the underground petroleum storage tank fund; and, maintains $650,000 in the Ag Marketing Division of the Kansas Department of Agriculture that had been slated for transfer to another state agency.

Following much debate in conference committees, on Thursday, March 19, the legislature passed, and sent to the Governor, House Sub for Senate Bill 173. Now known as the Eisenhower Legacy Transportation Program, this bill sets forth the state’s next 10-year transportation plan. The final plan will: specify the types of projects authorized, address local funding and new and continuing grant programs, authorize alternative procurement methods under certain circumstances, increase city connecting links payments, add reporting requirements, require at least $8 million to be spent in each county through FY 2030, state 16.154 percent of sales tax shall be levied for the State Highway Fund (SHF), and make additional changes to law. In addition, the plan includes a new $15 million, 3-year, 70/30 cost-share grant program for improvements to short line rail and rail siding owned or leased industry. Kansas Grain and Feed Association, Kansas Agribusiness Retailers Association, and Renew Kansas Biofuels Association requested inclusion of this language for its member companies.

Bills Passed, Advanced to the Governor:

On Tuesday, March 17, the Senate passed HB 2702 favorably on a vote of 39-0. The bill decouples the High Performance Incentive Program tax credit from the requirement to participate in either the Kansas Industrial Training (KIT) or Kansas Industrial Retraining (KIR) workforce training programs. The Division of the Budget states the bill would give the Department flexibility in using dollars from both the KIT and KIR programs. It is assumed that there would be an increase in those who qualify for the HPIP investment tax credit since there is no longer a training requirement and only the wage standard requirement. The Department of Commerce determines who would be qualified for the High Performance Incentive Program. The bill is advanced to the Governor for consideration. The bill was amended by the Senate Commerce Committee, and will head to conference committee.

Senate Bill 126. This bill would permanently exempt certain public utilities from paying an income tax and also exclude the utility from factoring the cost of this income tax in setting their utility rates. The purpose of the bill is to lower utility rates and make Kansas more competitive. The measure could save over 2 million Kansas residential and industrial rate payers over $40 annually in lower energy rates. The bill, which passed the Senate 40-0, awaits final action in the House Committee on Utilities. In addition, on a procedural motion, the Senate Committee on Utilities placed the contents of SB 126 into Senate Substitute for House Bill 2585, along with the contents of Senate Bill 339 concerning special contract rates for electricity.

Senate Bill 437. The bill would give the Kansas Corporation Commission the authority to authorize the issuance of ratepayer-backed securitized bonds in order to finance the retirement of existing generating assets in the state, as well as any replacement generation facilities necessary to replace the lost capacity and energy from the retired generation facility. The goal of the bill is lower utility rates by Kansas rate payers. A hearing on the bill was held in the Senate Utilities Committee.

House Bill 2490. This bill would extend the net operating loss carried forward period to 20 years (currently 10 years) beginning in tax year 2018. The bill was passed by the House on a vote of 118 to 2.

House Bill 2432. This bill would establish the Kansas Pesticide Waste Disposal Program and Fund within the Kansas Department of Agriculture. The program would be funded by an annual transfer of no more than $50,000 from the Kansas Agricultural Remediation Fund. The bill passed the House on a vote of 122-0, and was later recommended favorably for passage by the Senate Agriculture Committee.

Senate Bill 153. The bill would authorize KDHE to establish reportable threshold quantities of chemical spills in rules and regulations. The bill would also allow the agency to provide technical guidance during a clean-up response, and permit cost-recovery from the responsible party for any state expenses for response to a release. The bill would also provide KDHE the ability to levy penalties for illegal dumping, the refusal of the responsible party to clean up a release, or the lack of timely reporting of a release. Stakeholders – including, Kansas Grain and Feed Association, Kansas Agribusiness Retailers Association, and Renew Kansas Biofuels Association – worked with the agency to amend the bill to limit the effect of agriculture chemicals, and limit the total amount of civil penalty authority. The House Agriculture Committee held a hearing on this bill which passed the Senate on a vote of 37-3.

House Bill 2461. This bill – requested by Kansas Attorney General Derek Schmidt – would require local units of government to coordinate with the Attorney General in order to enter into a contract for legal services on a contingency fee basis. The bill is intended to allow for the state to exercise greater control over large suits such where the state – or local units of government – are the plaintiffs, rather than allowing each subordinate unit of government to enter into independent lawsuits. The bill represents good public policy for both the state and for industry, but was opposed by the Kansas Trial Lawyers Association and various cities and counties. Your association joined other agricultural interests in supporting the bill. The bill has received a hearing in the House Judiciary Committee, and a similar bill was introduced in the Senate Judiciary Committee.

Senate Sub House Bill 2515. This bill would create the Kansas Reinvest in Postsecondary Education Act (RISE Act), and amend the Kansas Private and Out-of-State Postsecondary Education Institution Act (KPOPEIA). The bill would also establish the Kansas RISE Scholarship Program (Program), which would be administered by the Kansas Board of Regents (KBOR). The Program would, subject to appropriations, provide a scholarship to eligible students for up to two years to attend a public or private eligible postsecondary educational institution in an associate degree program, career and technical education program, or baccalaureate degree completion program. The bill, which passed the House on a vote of 116-6, was supported by the Kansas Grain and Feed Association, Kansas Agribusiness Retailers Association, and Renew Kansas Biofuels Association. The Senate Committee on Education advanced the bill favorably for passage.

House Bill 2507. This bill limits a business’ exposure to liability from injury to a student participant in a school-sponsored vocational programs at the business’ worksite. The intent of the bill is to cover students during these vocational training activities in the same manner as they would be covered during school-sponsored sports activities. The bill was supported by the Kansas Grain and Feed Association, Kansas Agribusiness Retailers Association, and Renew Kansas Biofuels Association. The bill was passed by the House 97-27, and was advanced favorably for passage from the Senate Commerce Committee.

House Bill 2618. This bill would establish the state broadband deployment grant program in the department of commerce to encourage the deployment of broadband in the state. The bill was introduced following multiple meetings of a legislative broadband task force in 2019. Funding for this cost-share grant program is included in the state transportation plan. The bill had passed the House on a vote of 120-5, and was then recommended favorably for passage by the Senate Utilities Committee.

House Bill 2411. This bill would roll back certain changes made by legislation passed in 2018 which amended the Rules and Regulations Filing Act to introduce a heightened scrutiny of fiscal notes on proposed agency regulations. Kansas Grain and Feed Association testified on the bill, requested certain amendments, and then worked with other stakeholders to amend the bill to ensure that the net economic impact statement on a regulation includes all new costs imposed on industry. The House Committee on Federal and State Affairs recommended the bill favorably for passage to the full House.

House Substitute for SB 285. This bill, which also includes the contents of SB 286 and SB 287, would extend the existence of the UST redevelopment fund and compensation advisory board to 2032; amend the Kansas storage tank act by extending the sunset of the aboveground fund and the underground fund and increase the maximum reimbursement; and, amend the Kansas storage tank act by extending the expiration of certain reimbursement provisions to 2030 and increase the underground storage tank replacement reimbursement maximum. Kansas Grain and Feed Association, Kansas Agribusiness Retailers Association, and Renew Kansas Biofuels Association were proponents of the bill which passed the Senate on a vote of 39-0, and was then recommended favorably for passage by the House Committee on Agriculture.

SB 270. This bill allows water rights that were certified after 2009 to be placed in multi-year flex accounts, or MYFA’s. These tools, which were initially passed in 2011, allow farmers to conserve water in wet years to be used in more dry years over a five year period. The bill passed the Senate on a vote of 39-0 and was advanced favorably for passage from the House Agriculture Committee.

SCR 1614. This Resolution supports Kansas farmers in the Rattlesnake Creek sub-basin in their ongoing effort to protect their water rights and livelihood through a collaborative solution to the region’s water impairment issue. Multiple agricultural stakeholders testified in support of this measure, including the Kansas Grain and Feed Association, Kansas Agribusiness Retailers Association, and Renew Kansas Biofuels Association. The resolution passed the Senate on a vote of 37-0, and was advanced favorably for passage from the House Committee on Agriculture.