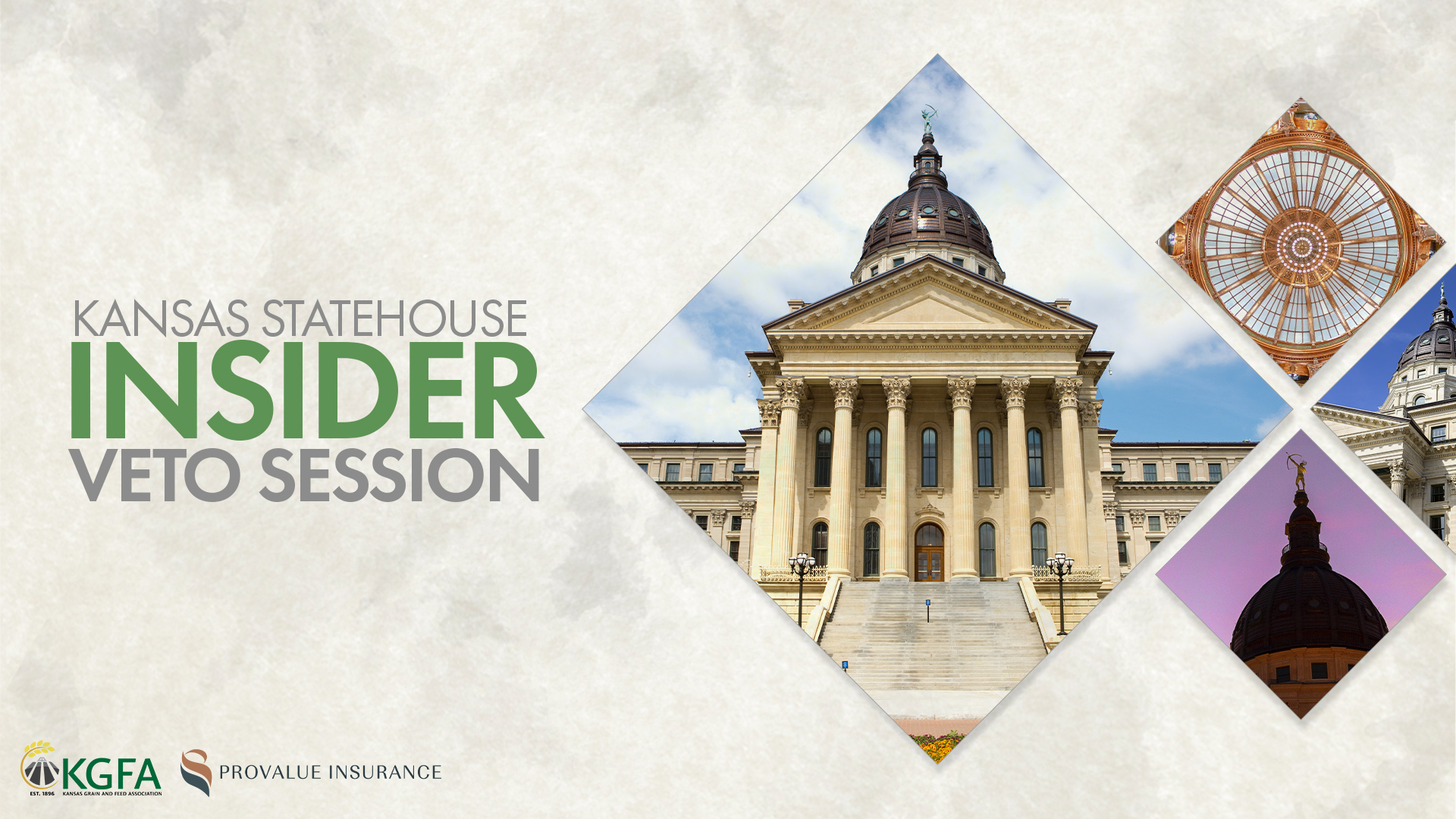 Posted at 05:00h in Advocacy by Editorial Team
0 Likes

The Kansas legislature will return for one final day of business on Thursday, May 21st. Multiple committee met this week to consider various bills – all of which will all compete for limited action next Thursday. Large items, such as Medicaid expansion, might still be open for discussion, as will certain tax bills and COVID-related items. The Legislature was initially scheduled to return a few weeks ago in April for a full veto session. That date was postponed, however, in response to concerns over the COVID-19 pandemic. Prior to adjourning in March, the Legislature passed a budget bill for fiscal year 2021, and legislation outlining the next state transportation plan.

Here are some of the highlights from this week:

Finance Council Shortens Emergency Declaration
On Wednesday, May 13th, the State Finance Council – consisting of Governor Kelly and legislative leadership – voted along party lines to extend the state’s emergency disaster order another 12 days through May 26th. This was a much shorter extension then the full 30 days allowed by law. The abbreviated extension prohibits full implementation of the Governor’s multi-phased recovery plan for opening the state. During the Council meeting, GOP legislators mentioned the need to amend state law concerning the Governor’s emergency management authority. This comes after much controversy surrounding the Governor’s multiple executive orders which limited business and social gatherings. Look for potential action on this issue when the Legislature reconvenes.

New Pesticide Waste Disposal Fund
House Bill 2432 would establish the Kansas Pesticide Waste Disposal Program and Fund within the Kansas Department of Agriculture. The program would be funded by an annual transfer of no more than $50,000 from the Kansas Agricultural Chemical Remediation Fund. The bill, which had previously passed the House on a vote of 122-0, was supported by the Kansas Grain and Feed Association, Kansas Agribusiness Retailers Association, and various other agricultural stakeholders. The Senate is expected to take the bill up for final action on Thursday, May 21st.

Electric Utility Rate Relief
Senate Bill 126 would lower electric utility rates by exempting certain public utilities from paying an income tax. The bill requires that these saving to the utilities be passed directly to the rate payers through lower utility rates. The measure could save over 2 million Kansas residential and industrial rate payers over $40 million annually. The bill, which previously passed the Senate on a vote of 40-0, was supported by the Kansas Grain and Feed Association, Kansas Agribusiness Retailers Association, and Renew Kansas Biofuels Association. Prior to the legislative break, the Senate Utilities Committee placed the contents of Senate Bill 126 into House Bill 2585, which also includes the contents of Senate Bill 339concerning special rates for certain utility users. The Senate is expected to take House Bill 2585 up for final action on Thursday, May 21st.

Economic Recovery Linked Deposit Loan Program
On Friday, May 15, 2020, the Senate Committee on Financial Institutions and Insurance held a hearing on a bill which would create a new Economic Recovery Linked Deposit Loan Program for businesses in response to the economic downturn caused by the COVID-19 pandemic. This would be a 10-year program that would make up to $200 million available for low-interest (sub-market) real estate loans to businesses. Similar programs exist in surrounding states. The loans would be underwritten by local lenders loans. Deposit interest rates could be up to 2%, with a floor of 0.25% below the market rate, and a maximum of 3% above the deposit interest rate. The measure was supported by many organizations, including the Kansas Grain and Feed Association, Kansas Agribusiness Retailers Association, and Renew Kansas Biofuels Association. The bill includes language from HB 2054 which provides an income tax credit for banks on agricultural real estate loans. The Committee placed the contents of the bill into House Bill 2619 – creating Senate Substitute for House Bill 2619 – and passed the bill out of committee. The Senate is expected to take up this measure for final action on Thursday, May 21st.

Corporate Limited Liability Legislation Concerning COVID-19
This week, the House Judiciary Committee met and considered proposed legislationthat would provide limited-liability protections to businesses, churches, schools, and others from claims of injury related to COVID-19 exposure. The Kansas Chamber and the American Tort Reform Association testified in support of the bill. The Kansas Trial Lawyers Association and the Kansas Advocates for Better Care testified in opposition. The proposed legislation would do the following: require the occurrence of an actual injury, not mere exposure; require a higher threshold for claims than a mere slip and fall liability case, as exposure to this virus is an unavoidable risk; encourage businesses that follow public health guidance for operating as safely as possible; and, offer product liability limitations for companies that are making PPE and other products (hand sanitizer) to assist with the COVID-19 pandemic, when the manufacture of those products is novel to the business and only done in response to the COVID-19 pandemic. A separate bill, brought by the Kansas Medical Society and Kansas Hospital Association, would limit liability for health care providers from claims related to the COVID-19 virus.  Senate Tax Committee ActionOn Wednesday, May 13, 2020, the Senate Committee on Taxation took action on the following bills:

House Tax Committee Action
On Thursday, May 14, 2020, the House Committee on Taxation met, via Zoom, and took action on the following bills:

Property Tax Relief Following Natural Disaster
On Thursday, May 15, the House Tax Committee amended Senate Bill 125, and then passed the bill out of committee favorably:- The committee amended the bill by inserting language from HB 2517, allowing for a property tax abatement to all property owners impacted by a Governor-declared natural disaster when that natural disaster has caused substantial or total loss to the property. Current law only provides this tax abatement to residential property owners. Kansas Grain and Feed Association had successfully sought an amendment to the bill to extend the tax abatement to owners of commercial property.- The committee amended the bill by inserting language from HB 2607, allowing county treasurers the authority to establish a payment plan for the payment of delinquent or non-delinquent property taxes, and providing Kansas property owners a grace period in the year 2020 if they are unable to pay their property taxes so that the payment normally due on May 11, 2020 would not be due until August 10, 2020, and penalties and interest would not begin to accrue until August 11, 2020.

KDOT Identifies 40 Projects Under New Eisenhower Legacy Transportation Plan
In March, the legislature passed the legislation defining the state’s next transportation plan, called the Eisenhower Legacy Transportation Plan. This week, the Kansas Department of Transportation announced the first 40 projects it will work on under the new program. The project list includes both modernization and expansion projects. New projects will only begin after all remaining T-Works projects of the last decade are completed. The unfinished projects from the previous plan have an estimated cost of about $435 million. While the previous transportation program set out a 10-year project timeline, the new plan narrows that down to a two-year time frame for project planning to provide greater flexibility.

State Dept. of Labor Receives Criticism
On Thursday, May 14, 2020, the Senate Commerce Committee met to review and discuss issues with the state unemployment insurance system within the Kansas Dept. of Labor. During the hearing, multiple unemployed Kansans testified to how they have not been able to successfully apply for or receive state unemployment benefits after losing work as a result of the pandemic. The hearing, which lasted most of the day, included an update to the Committee the Secretary of Labor Delía Garcia. Secretary García stated that the department has been forced to work remotely during the pandemic, and has been working long hours with an antiquated legacy mainframe system that has slowed down processing of unemployment claims. She stated that Kansas has experienced over 236,000 new unemployment claims since March. As Kansas’ unemployment insurance fund has $957 million balance, it is thought that it will be solvent for the long run. The fund has made $320 million in payments to unemployed Kansans, including a $600 per person for federal weekly unemployment benefit. Other state agency employees that have been back-filling for the department will return to their agencies on May 18th.

Federal Relief Funds to the State
The House Appropriations Committee met multiple times this week to discuss $1.25 billion in federal pandemic relief funds and an Executive Committee being formed to make those decisions. The Executive Committee – to be named next week – will consist of 5 members. The Executive committee will make recommendations to a separate 15-member Steering Committee. State Budget Director Larry Campbell testified that the federal funds may not be used to merely reimburse the state for lost revenues, and that the federal funds may only be used for expenses directly-related to the pandemic. The funds may be used to help businesses contend with direct COVID-related expenses, such as improving social distancing measures. The state looks to receive the federal funds toward the end of this year. Legislators openly expressed concerns over the Legislature’s lack of involvement and oversight of the budgeting process.