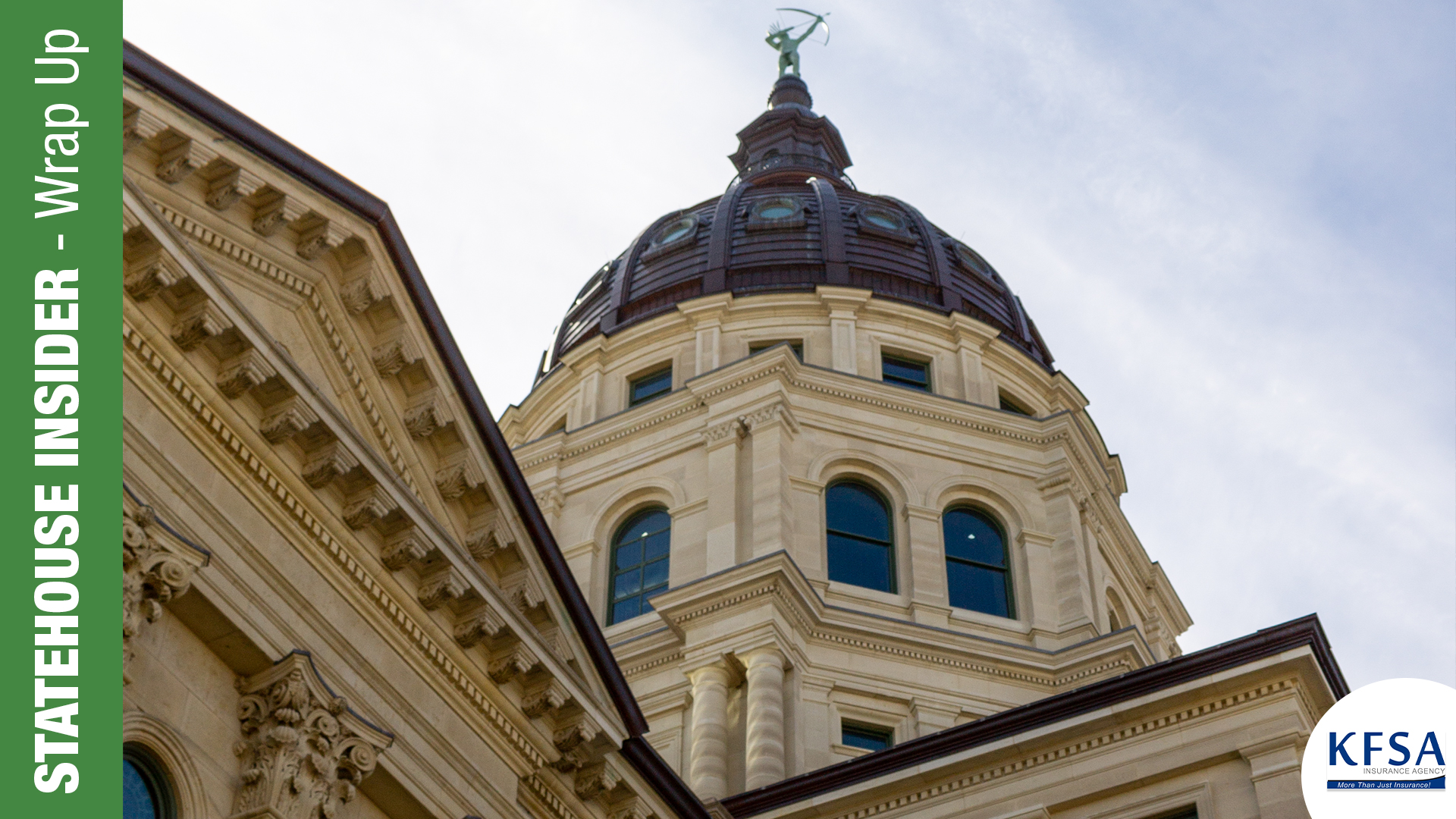 Posted at 12:50h in Advocacy by Editorial Team
0 Likes

Last week was the “Veto Session” of the 2019 legislative session. From Wednesday through early Sunday morning, the legislature tackled some important issues, including the annual budget, a large tax bill and some smaller items concerning scrap metal theft and CBD oils. Over the last few weeks, while the legislature was not in session, Governor Laura Kelly signed various bills or allowed the bills to become law without her signature. The legislature is now adjourned until Sine Die (the final adjournment) on Wednesday, May 29, 2019.

Legislature Approves Annual Budget
During the Veto Session, the House twice rejected the agreed to omnibus budget bill House Substitute for Senate Bill 25 in an attempt to force the Senate to vote on Medicaid expansion in Kansas. Late on Saturday, May 4, however, the House was able to receive sufficient votes to pass the budget for the remainder of fiscal year 2019 and for fiscal year 2020. The 2020 fiscal year budget, with $7.75 billion from the State General Fund, incorporates adjustments to the Governor’s Recommendations. Both the House and Senate passed the budget bill which now heads to the Governor for consideration.

Corporate and Individual Income Tax Legislation
The Legislature did not attempt to override Governor Kelly’s veto of the major tax legislation of the session in Senate Bill 22, a bill which would have decoupled portions of the Kansas corporate tax code from the federal corporate tax code following passage of the 2017 Federal tax cuts and jobs act, and would have allowed individuals to itemize their state return while taking the federal standard deduction. However, during the veto session, the House and Senate rolled much of the contents of SB 22 into a conference committee report on House Bill 2033 as another attempt on passage of the tax initiative. Both chambers passed the tax bill as one of the final actions of the session. The bill includes the repatriation language from Senate Bill 22, but places a 5 percent tax on 2018 GILTI (0 percent going forward). The bill also contains the tax exclusion language from Senate Bill 22 for FDIC premiums paid by banks, but it is not retroactive. The bill also includes the small business expensing language from SB 196 for individuals and corporations. Also included is language allowing businesses to deduct 100 percent of net operating losses for 20 years (currently capped at 10 years). The bill removes language concerning the 163J business interest expense limitation provision. House Bill 2033 now advances to Governor Kelly, where there is some indication it may receive a veto even though the fiscal note (about $238 million over three years) was reduced by almost half as compared to that of Senate Bill 22 – mostly due to the removal of certain corporate tax provisions and not allowing the bill to be retroactive. House Bill 2033 did not receive sufficient votes to override a veto. If the Governor does veto the bill, the legislature will have one remaining opportunity to override that veto on Sine Die (the final legislative day) on May 29th. Generally, not all legislators return for Sine Die, which will make a veto override more difficult.

Economic Incentive Transparency Bill Sent to Governor
On May 2, the legislature passed Conference Committee Report on House Bill 2223, a bill which creates a publicly available examination of economic development incentives for Kansas businesses, including tax credits and property tax exemptions of $50,000 or more annually. The bill authorizes the Legislative Post Audit Committee to conduct a systematic and comprehensive review and evaluation of each “economic development program” every three years. The bill now moves to the Governor for consideration.

Underground Utility Damage Prevention Bill Becomes Law
On April 11, Governor Kelly signed into law House Bill 2178, a bill which restates the existing legal obligations of utilities concerning the marking of underground electric lines. This bill confirms current law that utilities are required to mark lines they own, but are not required to mark privately-owned lines. This bill prevents a 2018 Kansas Corporation Commission order from going into effect which would have placed a new requirement on utilities to mark privately-owned lines.

Governor Signs Commercial Hemp Bill
On April 11, Governor Kelly signed into law Senate Substitute for House Bill 2167, a bill which allows the Kansas Department of Agriculture (KDA) to monitor and regulate the commercial production of industrial hemp in Kansas. The bill excludes industrial hemp, when produced and possessed for authorized activities, from the definition of “marijuana” in current law and would be excluded from the list of Schedule I controlled substances. Hemp producers who violate this act or associated rules and regulations would not be subject to any state or local criminal enforcement action.

Scrap Metal Theft Reduction Act
On Wednesday, May 4, the legislature passed Conference Committee Report on House Bill 2248, a bill that amends the scrap metal theft reduction act by creating the scrap metal data repository fund and authorizes the Kansas Bureau of Investigation to administer the program. Committee amendments removed a proposed excise tax and reduced the registration fee on scrap metal dealers to no more than $500. The bill becomes effective on July 1, 2020, and has a three-year sunset from that date. Renew Kansas, Kansas Grain and Feed Association and Kansas Agribusiness Retailers Association joined a group of other interested parties in supporting passage of the bill. The bill now moves to the Governor for consideration.

ATV Use on Highways
On Wednesday, May 1, the legislature passed Conference Committee report on Senate Bill 63, a bill which authorizes the operation of ATVs and work-site utility vehicles across a federal highway or a state highway. The bill also authorizes a person engaged in agricultural purposes to operate an ATV or work-site utility vehicle on the shoulder of a federal or state highway. The bill now goes to the Governor for consideration.

Cabinet Confirmations
On May 3, the Senate confirmed Delia Garcia as Kansas Secretary of Labor, and Susan Duffy to the Kansas Corporation Commission. Garcia, a former state representative from 2005-2010, had recently headed a group working to increase the diversity and number of women in public office. She had previously worked for the National Education Association in Washington, D.C. Duffy succeeds former State Senator Jay Emler, who is expected to take a post in the Kansas Attorney General’s office. Duffy is a former executive director of the Kansas Corporation Commission, and most recently has been manager of Topeka Metropolitan Transit.