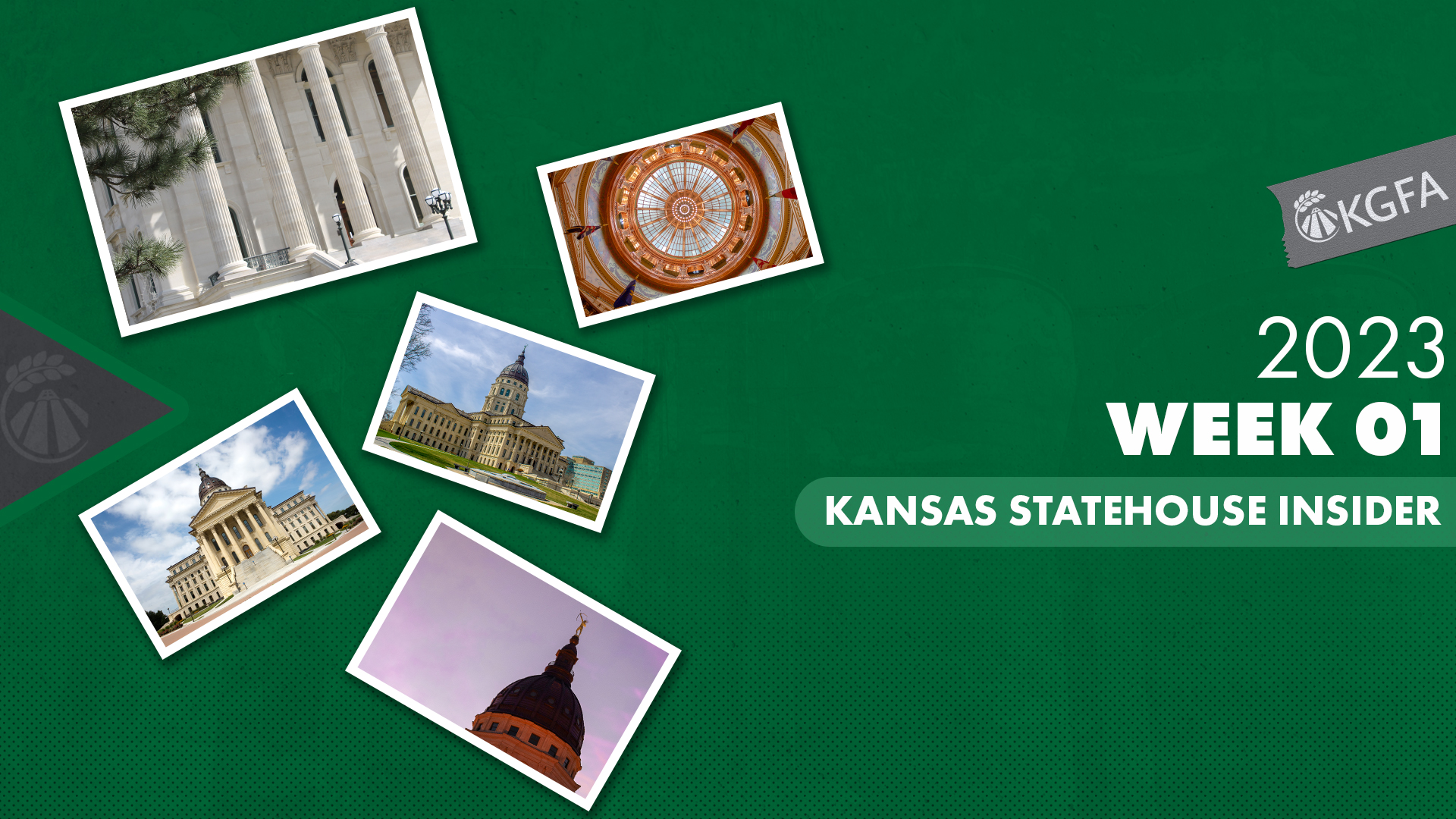 Posted at 10:28h in Advocacy by Editorial Team
0 Likes

The Kansas legislature gaveled in on Monday, January 9, 2023, on the first day of the 90-day session of the two-year biennium. Kansas Grain and Feed Association’s (KGFA) government affairs staff was at the capitol to greet new members and welcome back returning legislators. House and Senate Leadership released their shared vision for this session. Governor Laura Kelly’s was sworn in, but her State of the State address was postponed while she recovered from symptoms of what was initially thought to be COVID-19, but later turned out not to be the case.

Key issues anticipated this session include a quickening of the removal of sales tax on food products, various attempts at property tax reform, continued discussions on water policy and workforce development, a look at reducing the high cost of energy, possible legalization of medical marijuana, and deliberations on how to effectively spend the state’s growing projected ending balances. Please find a summary of the legislative action from this week below.

A Fox News survey of the 2022 Kansas election showed 59 percent of Kansas voters identified as Republican, 35 percent as Democrats, and 6 percent independent. This is a 5 percent increase in Republican voters from 2018. Kansas remains a Republican state, electing conservative Kris Kobach, R-Tecumseh, for Attorney General, but also re-elected Democrats in Congresswoman Sharice Davids and Governor Laura Kelly. The 125-member House will see 35 new legislators this year, and the Senate will also experience four new members due to resignations. House and the Senate Republicans will begin the session with super-majorities to over-ride the Governor’s veto. Looking forward, however, large population movements from rural areas to more urban areas of the state will likely result in fewer rural legislative districts and new districts in urban areas.

In 2020, the legislature passed the Eisenhower Legacy Transportation Program in Senate Bill 173. The program included a $15 million, 3-year, cost-share grant program (70/30) for maintenance and improvements to short line rail and rail siding. The program is a partnership between the public and private sector. In 2020, 2021, and 2022, KDOT set aside a percentage of the $5 million program funds specifically for industry rail siding. This funding has greatly benefited the Kansas grain industry. The third year of grants will be let in early 2023. KGFA is working with the Kansas Department of Transportation to seek an extension of this beneficial program. The 2022 project grants have not yet been released by the Kansas Dept. of Transportation.

Kansas has the highest energy rates in our region. In recent years, legislation was introduced to reduce rates while ensuring reliable service. Other legislation is likely to be introduced this year to do the following:

● transfer KCC’s utilities division and litigation staff to the Office of the Attorney General – a system utilized by some neighboring states.

Kansas currently uses a three-factor system for apportioning income between states for corporate income tax purposes. Legislation has been introduced in recent years to allow corporate taxpayers the option to elect which methodology to use when apportioning their corporate income between Kansas and other states in which it operates to determine tax liability. The proposed legislation would allow certain taxpayers, based on NAICS codes, to elect to use a single-factor apportionment formula based on sales to determine corporate income tax liability. The bill may have a cost to the state of approximately $20 million. Similar legislation is likely be introduced again this year.

House Democrats have indicated that residential property tax relief is a top priority. During an interim tax committee meeting last fall, House Minority Leader Vic Miller, D-Topeka, proposed reinstating funding to local units of government, through the local ad valorem tax reduction fund, to provide financial assistance for local reduction in property taxes. Additionally discussed was a proposed amendment to the Kansas constitution which would reduce the residential property assessment from 11.5 percent to 9 percent, and legislation to increase the school mill levy exemption from $40,000 per residential property to $65,000. Other ideas discussed during the interim tax hearings include the election of local property tax appraisers. Currently, county commissions hire local tax appraisers as employees of the county.

Senate Bill 8 was introduced which would reduce penalties for the late filing, or failure to file, personal property renditions and the discovery of escaped personal property. The bill was referred to the Senate Committee on Assessment and Taxation.

After sweeping water legislation was proposed in the House last year, new House Speaker Dan Hawkins, R-Wichita, has appointed a new House Water Committee, and a new Committee Chairman in Representative Jim Minnix. Speaker Hawkins has indicated that the drought and water issues were brought up by constituents and legislators across the state, and that he expects any new legislation to be cautiously crafted and take the full legislative biennium to be developed.

Governor Laura Kelly’s FY 2024 Budget Recommendations were released on Thursday, focusing on “targeted and sustainable tax relief,” Medicaid expansion, and various one-time investments. Here are some highlights of the budget and policy recommendations:

● add nearly $1 billion in various one-time expenses, including an additional $500 million in the Budget Stabilization Fund; $220 million in an “Infrastructure Hub”; and $53 million to retire state debt owed to the federal government for two state water reservoirs (saving the state nearly $30 million in future interest payments)

● add $108 million in funding to the state’s post-secondary education system ($66 million in base aid, and $42 million in one-time funds), and

● set $20 million aside for use in a Housing Revolving Loan Program for urban housing (in addition to the $20 million set aside last year for rural housing).

Following the 2022 election, the 2023 session brings the following new leadership in the House of Representatives:

On Tuesday, Republican Speaker of the House Dan Hawkins and Senate President Ty Masterson unveiled a shared vision for the 2023 legislative session – referred to as “A Better Way.” The agenda contains about a dozen points covering such items as taxes, health care, education and school choice, the economy, welfare reform, law enforcement, and battling the fentanyl crisis. The announcement sets forth a general road map of what the GOP would to get accomplished in the next two years. Senate President Masterson indicated he is looking for opportunities to work with Governor Laura Kelly.

The House and Senate Budget Committees received an update from the State Budget Director on the State’s projected revenues and expenses for fiscal years 2023 and 2024. Here is a summary:

● Kansas’ unemployment rate in 2022 was 2.6 percent and is estimated to increase to 3.5 percent in 2023. There are an estimated 2.5 jobs available for every unemployed Kansan.

● FY 2024 human service caseload expenses are expected to increase $163 million over FY 2023, mostly due to KanCare services for elderly and disabled.

This week, House and Senate leadership, and some business interests, have begun to discuss the idea of a single rate income tax, or flat tax, for both individuals and businesses. Kansas has three tax brackets for individuals. The corporate income tax consists of 4 percent of all taxable income plus a 3 percent surtax on all taxable income above $50,000. Proponents say a single income tax rate would make Kansas’ business climate more competitive and provide a more simple and transparent tax code to taxpayers. A single-rate bill was introduced in the Senate Tax Committee on the second day of session.

Governor Laura Kelly has recommended speeding up the scheduled full repeal of the state sales tax on food products. The state sales tax on food was reduced from 6.5 percent to 4 percent on Jan. 1 of this year, and it is scheduled to be reduced to 2 percent in 2024, and to zero in 2025. Governor Kelly has recommended changing the law to eliminate the state sales tax entirely – or “axe the tax” – beginning April 1 of this year. It remains to be seen what leadership in the House and Senate will decide to do, but it is thought that the full cost of the repeal might frustrate passage of the proposal. A compromise proposal has been discussed of fully repealing the sales tax but narrowing the scope of what products would qualify for the exemption as “food.” Multiple bills have already been filed this week directed at achieving this goal.

Kansas law prohibits the seller or lessor in any sales or lease transaction or any credit or debit card issuer from imposing a surcharge on a card holder who elects to use a credit or debit card to make the purchase (at retail, and not business-to-business). Last year, a bill was introduced to eliminate this prohibition and allow the imposition of such a surcharge. While that bill did not pass into law, we anticipate a new bill being introduced again this session.

Last year, legislation was passed and sent to the Governor that would have prohibited cities and counties from regulating plastic and other containers designed for the consumption, transportation or protection of merchandise, food, or beverages. Governor Kelly vetoed the bill to the legislature. There were not enough votes to override the veto, and the bill died. However, we anticipate similar legislation being introduced this session.

This week, the House Committee on Commerce received an update from the Kansas Secretary of Labor. In 2021, during the COVID-19, the state’s Unemployment Insurance (UI) Trust Fund lost around $600 million due to improper fraudulent payments from the fund. Prior to this, the fund balance was around fully funded at $1 billion, and was considered one of the healthiest UI funds in the nation. Using state general funds and federal COVID relief funds, the legislature has now shored-up the UI fund to a balance of over $1 billion, and in 2022 the fund was once again certified as solvent.

A private-public partnership is looking to help Kansas establish a regional hub for producing hydrogen that would reduce the country’s dependance on fossil fuels. A trade association that promotes the development of renewable energy is working with the Kansas Geological Survey and the University of Kansas to land a $1.2 billion federal grant for a regional hydrogen hub. The U.S. Department of Energy is seeking proposals for a $7 billion program. Hydrogen will be one of the main issues discussed in the House Utilities Committee this year.

In 2022, a survey of Kansas voters found that 62 percent wanted to legalize marijuana nationwide. Last session, the House passed a bill legalizing medical marijuana, however the Senate did not debate the measure. In a recent interview, Senate President Ty Masterson said the Senate may look at the medical marijuana issue, but any legislation coming from the Senate is likely to be much more conservative. Masterson said that it would need to be “legitimate medicine” with a medically recognized medical benefit, dosage, and delivery method.

House Bill 2005 was introduced to establish a traffic infraction for a person that drives while fatigued. The bill was referred to the House Committee on Corrections and Juvenile Justice.