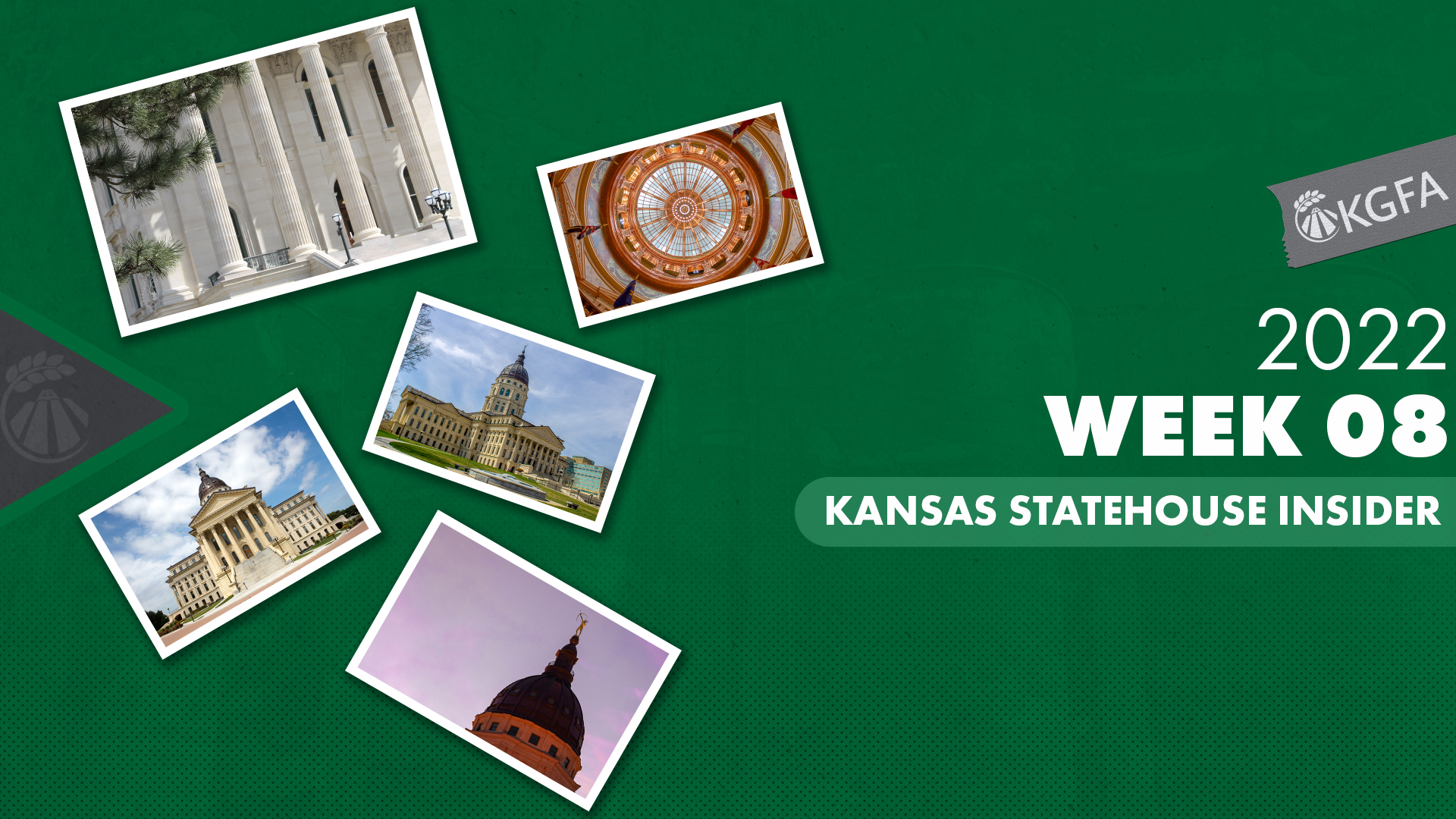 Posted at 11:45h in Advocacy by Editorial Team
0 Likes

The legislature returned to work this week to begin further consideration of bills. On Thursday afternoon, while debating a bill that would provide income tax credits to graduates of aviation-related programs and their employers, the Senate amended the bill multiple times to add other income and property tax bills and programs with a total cost of over $100 million to the state. The bill now includes such items as an income tax credit for schoolteachers, a freeze on property taxes for seniors and veterans, property tax breaks on school taxes, and a rural housing development tax credit. One amendment that was narrowly defeated would have added Governor Laura Kelly’s proposal to provide every Kansas taxpayer a one-time $250 cash rebate. That proposal would have cost the state $460 million. The bill would be the first major piece of tax legislation to pass a chamber this session.

The House continues to hold off action on tax bills as the legislature wrestles with how best to spend down the estimated $3 billion ending balance for the current fiscal year. That ending balance was just increased as February state tax revenues beat estimates by 4 percent, adding another $18 million to this year’s ending balance. The major issues remaining for the session include various tax cut bills, redistricting of legislative districts, and passage of the 2022 omnibus and 2023 state agency budgets.

This week, the Senate debated Senate Bill 326 and advanced the bill to final action. The bill would provide an income tax credit for qualified railroad track maintenance expenditures of short line railroads and associated rail siding owners or lessees. Short line rail investments would qualify for a tax credit of $5,000 per mile of rail, up to 50% of the railroad’s annual total income tax bill. Rail siding would qualify for $5,000 per rail project. The bill was amended to limit the transferability of the tax credit to any eligible customer or vendor of the railroad. The tax credit would exist from 2022 through 2031, and the total value of the program could not exceed $8.7 million in any given year. Various short line rail roads testified in support of the measure, along with Kansas Grain and Feed Association and the Kansas Cooperative Council.

On Thursday, March 3, the House Transportation Committee received an informational briefing from the Kansas Motor Carriers Association on new federal requirements for entry-level driver training for commercial driver’s license (CDL) trainees. Kansas CDL requirements must conform with Uniform Commercial Driver’s License standards, or the state could be at risk of losing federal highway funding. As of February 7, 2022, anyone who applies for a commercial driver’s license must receive the new entry level training which consists of a “theory portion” for a written test, as well as a driving test. While driver training at many private driving schools can cost around $5000, some Kansas technical colleges offer the training at a lower cost. Certain exemptions to this new entry level driver training exist for (1) firefighters/emergency responders, (2) members of the military operating military equipment, and (3) farmers operating a farm truck registered as a not for hire farm truck which is exempt from CDL requirements within 150 miles of the farm. The presenter told the committee that the principal issue for commercial drivers was commercial drivers competing against farmers “for hire.”

House Bill 2703 wouldmodify the My Reemployment Plan Program and, with certain exceptions, make use of the program mandatory for those receiving unemployment insurance benefits. The Secretary of Commerce would be allowed to require claimants to participate in reemployment services. In addition, the bill would amend solvency and credit rate schedules for the Employment Security Fund. Having passed the House, a hearing on the bill is scheduled for Thursday, March 10 in the Senate Commerce Committee.

Kansas currently uses a three-factor system for apportioning income between states for corporate income tax purposes. House Bill 2186 would allow corporate taxpayers the option to elect which methodology to use when apportioning their corporate income between Kansas and other states in which it operates. The legislation would allow certain taxpayers, based on NAICS codes, to elect to use a single-factor apportionment formula based on sales to determine corporate income tax liability. This week, the House Tax Committee amended the bill to add NAICS codes for additional businesses and industries as requested by the Kansas Chamber of Commerce. The House is holding off acting on tax bills.

This week, the House Water Committee amended House Bill 2686 and passed the bill out of committee. As introduced, this bill was incredibly broad, would have rewritten much of the existing structure of Kansas water law, and increased livestock watering fees. On Monday, the committee amended the bill with a substitute bill that removed all previous language and replaced it with the following: (1) place certain reporting requirements on the ground water management districts, and (2) transfer 1.538% of the existing state sales tax into the state water plan fund, generating approximately $49.5 million annually for the fund.

Introduced and referred to the Senate Commerce Committee, Senate Bill 361 would eliminate the $155,000 cap on permanent total disability in Kansas’ Workers Compensation Act. The bill would allow an injured worker who is determined to be permanently totally disabled to receive weekly benefits at the rate of the employee’s average weekly wage in effect on the date of the injury for which compensation is being made, starting from the date of maximum medical improvement and continuing for life, or the duration of the disability. A hearing on the bill is scheduled for Tuesday, March 8.

House Concurrent Resolution 5014 would propose a constitutional amendment to increase legislative oversight of agency regulations. If approved by two-thirds of the legislature, the amendment would go before Kansas voters in the 2022 election. Having passed the House, the Senate Judiciary Committee held a hearing on the resolution this week. Proponent testimony was provided by Kansas Agribusiness Retailers Association, Kansas Grain and Feed Association, and Renew Kansas Biofuels Association.

Substitute for Senate Bill 34 would require states agencies to review each of its regulations, at least once every five years, to determine if they are still valid and necessary. The bill also allows for a 15-day quick repeal process for outdated regulations. Having passed the Senate, it is scheduled for a hearing in the House Committee on Federal and State Affairs on Wednesday, March 9.

House Bill 2087 would amend a law requiring review of economic impact of proposed regulations by the state budget director. The Senate amended the bill to reduce the review threshold from $3 million to, $1 million, to increase the number of regulations reviewed by the state budget director. The bill is now on the House calendar to either concur or non-concur with the Senate amendment.

House Bill 2560 would authorize the KS Dept. of Agriculture to extend current fees on agribusiness without increasing those fees. The bill would also extend, to 2030, the existing water right transition assistance program (WTAP) administered by the agency. The agribusiness industry testified neutral on the bill and explained that fees on agribusiness are currently higher than most neighboring states and the associations would oppose any attempt to increase the fees. Having passed the House, the Senate Committee on Agriculture and Natural Resources held a hearing on the bill on Wednesday, March 2 where KARA testified as a proponent so long as fees were not raised.

Kansas law prohibits the seller or lessor in any sales or lease transaction or any credit or debit card issuer from imposing a surcharge on a card holder who elects to use a credit or debit card in lieu of payment by cash, check or similar means. A surcharge is defined as any additional amount imposed at the time of the sales or lease transaction by the merchant, seller or lessor that increases the charge to the buyer or lessee for the privilege of using a credit or debit card. House Bill 2316 was introduced to eliminate this prohibition and allow the imposition of a surcharge. Having passed the House, the Senate Tax Committee held a hearing on the bill where Kansas Agribusiness Retailers Association provided proponent testimony.

Introduced by House Speaker Pro Tem Blaine Finch (R-Ottawa), HCR 5023 denounces price gouging and market manipulation in the natural gas marketplace, and supports investigations into the extraordinary price increases of wholesale natural gas during the extreme cold weather event “Uri” during February 2021 that resulted in increased costs on ratepayers. Having passed the House, a hearing on the resolution is scheduled in Senate Utilities Committee on Tuesday, March 8.

In 2021, House Sub for SB 91 was introduced with the purpose of providing businesses with immunity from general liability for participating in work-based learning programs with students. Under the bill, schools would insure against this liability in the same way that they insure students during field trips and sporting events. This reasonable legislation is beneficial for businesses as they seek to increase the Kansas workforce. A conference committee between the House and the Senate has been appointed to determine final language on the bill.

Senate Bill 327 would exempt separately stated delivery charges from state sales tax beginning on July 1, 2022. The state department of revenue estimates the bill would cost the state $4.8 million annually. Having passed the Senate, the bill was heard in the House Tax Committee on Tuesday, March 1. Proponent testimony was submitted by Kansas Agribusiness Retailers Association and Kansas Grain and Feed Association.

Senate Bill 493 would prohibit cities and counties from regulating plastic and other containers designed for the consumption, transportation or protection of merchandise, food, or beverages. Having passed the Senate, the bill is scheduled for hearing in the House Commerce Committee on Wednesday, March 9.

Senate Bill 495 was introduced at the request of the Kansas Society of Certified Public Accountants. The bill would establish the “salt parity act” to allow pass-through entities to elect to pay state income tax at the entity level. The bill is scheduled for hearing in the Senate Tax Committee on Thursday, March 10.

Last year, Governor Kelly signed into law a workforce development bill creating the Kansas Promise Scholarship Act which provides educational scholarships to students attending a Kansas community college, technical college, or two-year associate degree program or career and technical education programs. The scholarship would be eligible for students pursing certain fields of study, including manufacturing, construction, and others. This year, Senate Bill 340 was introduced to amend the act to authorize additional programs and fields of study. A presentation on the bill will be held in the Senate Committee on Ways and Means on Thursday, March 10.

House Bill 2631 would enact the Career Technical Education (CTE) Credential and Transition Incentive (CTI) for Employment Success Act. The bill would provide a new category of state aid to school districts for students obtaining a CTE credential. In addition, a school district that offers CTE and has students that obtain a CTE credential would receive state aid payments subject to the availability of appropriations. A hearing on the bill is scheduled in the House Education Committee on Tuesday, March 8.

KPERS Legislation Moving Through the Process
The House Insurance and Pensions Committee has begun work on House Bill 2561, which would utilize a large part of the state’s projected budget surplus to stabilize the KPERS retirement fund for our teachers, firefighters, and other public employees. The plan would appropriate $1 billion from state general funds to the KPERS Trust Fund, which would pay off layering debt payments to eliminate the annual $25.8 million payments on delayed employer contributions; lower future costs for taxpayers by reducing the amount needed for the state’s share of employer contributions, saving taxpayers $82 million in fiscal year 2023, and $430 million over the next five years; and, bring KPERS above the 80 percent funded level. In proponent testimony, Kansas Attorney General Derek Schmidt noted that the bill is a fiscally responsible approach that reduces debt and frees up $70 – 80 million annually for the state budget.