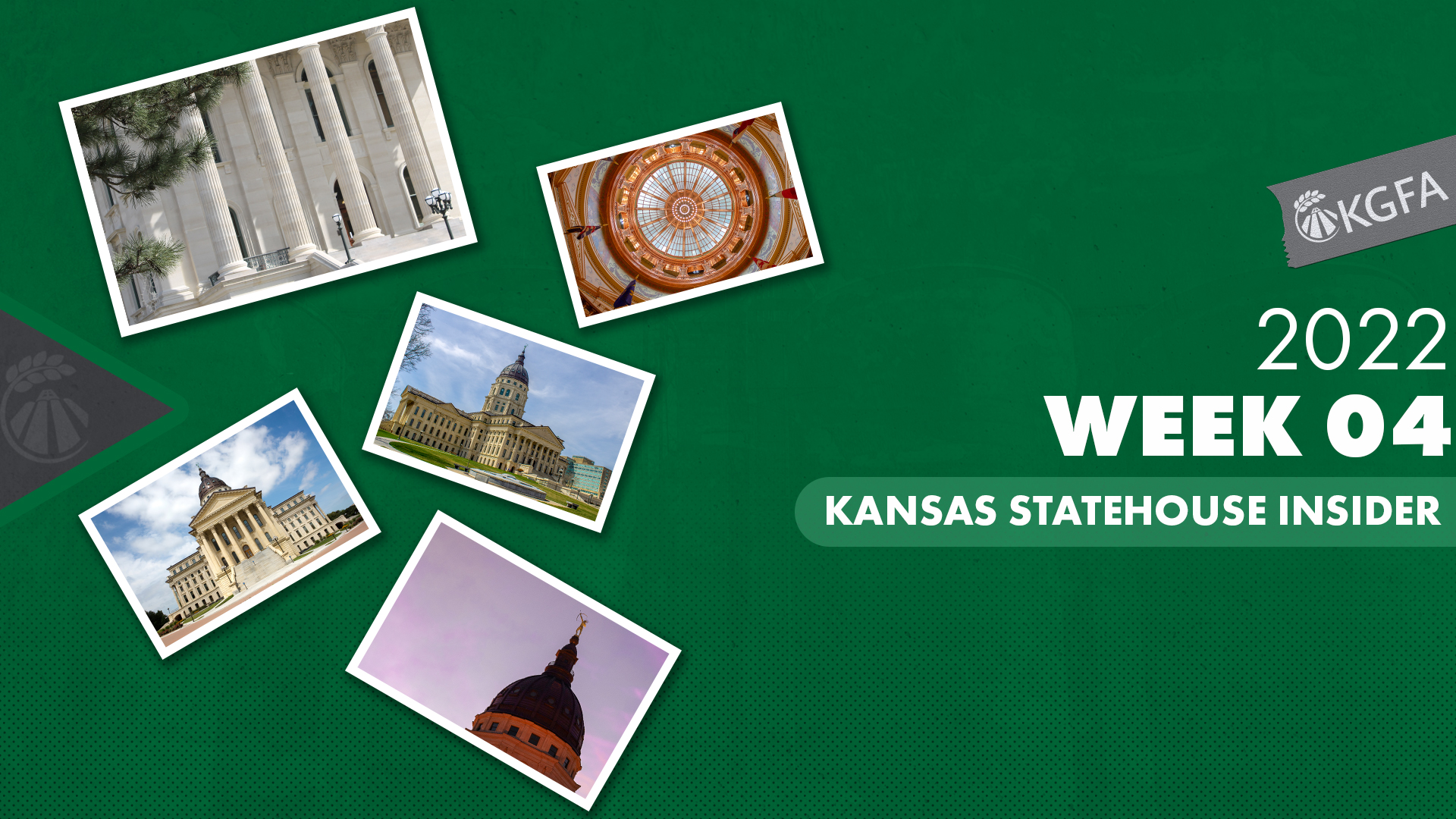 Posted at 08:14h in Advocacy by Editorial Team
0 Likes

This week, the legislature took a day of hiatus when winter storms were predicted to bring heavy snow to the capitol city. On Thursday, as predicted, Governor Laura Kelly vetoed a Republican-friendly map that would have drawn new lines for the state’s four Congressional districts. The House got bogged down in deliberation over the Kelly Administration’s economic development bill aimed at bringing a large national corporate headquarters to the state with a specified capital investment of at least $1,000,000,000. Next week, a legislative committee will consider a bill that would transfer $1 billion from the state’s general fund into the state employee retirement system (KPERS) to shore up the account from funds previously borrowed by the state to cover expenses.

One of the required benchmarks of the 2022 session is the passage of new district maps for the legislature, statewide offices, and Congressional districts. On Thursday of this week, Governor Kelly vetoed Sub Senate Bill 355 which would have redrawn Kansas’ four congressional districts. The bill had previously passed from the legislature (Senate 26-9 and in the House 79-37). The bill lacked Democrat support as the map would split Wyandotte County and Johnson County in the 3rd Congressional District, which was seen as making re-election efforts more difficult for Congresswoman Sharice Davids (D-Kansas City). The bill now returns to the legislature for consideration of an override of the Governor’s veto.

Kansas currently uses a three-factor system for apportioning income between states for corporate income tax purposes. House Bill 2186 would allow corporate taxpayers the option to elect which methodology to use when apportioning their corporate income between Kansas and other states in which it operates to determine tax liability. The proposed legislation would allow certain taxpayers, based on NAICS codes, to elect to use a single-factor apportionment formula based on sales to determine corporate income tax liability. The bill may have a cost to the state of approximately $20 million. The House Tax Committee will hold a hearing on the bill on Tuesday, Feb 8 at 3:30 pm. It is understood that the Kansas Chamber is prepared to offer suggested language as an amendment to the bill to include additional NAICS codes requested by industry. Kansas Grain and Feed Association will submit testimony in support of the measure.

This week, the House Tax Committee held a hearing on Senate Bill 318, which would provide for a sales tax exemption for purchases to reconstruct, repair or replace certain fencing damaged or destroyed by wildfires across the state in December. The bill was amended to provide a permanent exemption on these materials from the state sales tax. In addition, the bill was amended to allow county commissioners to provide a property tax exemption for properties that were damaged during a natural disaster. The Department of Revenue estimates that the bill would cost the state $2.46 million annually.

This week, the Senate Tax Committee advanced Senate Bill 327 favorably for passage and placed the bill on the Senate Consent Calendar. The bill would exempt separately stated delivery charges from state sales tax beginning on July 1, 2022. The state department of revenue estimates the bill would cost the state $4.8 million annually in lost revenue.

The Senate Tax Committee advanced Senate Bill 354 favorably for passage. The bill would exempt third party price reductions in the selling price of a product (manufacturer coupons) from the calculation of sales tax beginning on July 1, 2022. The state department of revenue estimates the bill would cost the state $2 million annually in lost revenue.

Governor Laura Kelly, and 2022 Gubernatorial Candidate (and current Attorney General) Derek Schmidt have stated a goal of eliminating, to some degree, the current state sales tax on food. Referred to as Governor Kelly’s “Axe the Tax” plan, a full repeal of the food sales tax would cost the state over $500 million annually in lost revenues, while allowing the average Kansas family to save about $500. Multiple bills on the issue have been introduced. This week, the Senate Tax Committee held a hearing on Senate Bill 342 which would provide a 0% state rate for sales and use taxes for sales of food and food ingredients but also allow cities and counties to assess the sales tax. The bill would also provide for a tax exemption for sales of farm products sold at farmers’ markets and discontinue the current nonrefundable food sales tax credit. The committee also held a hearing on Senate Bill 339,  a bill which would also exempt sales tax on food sold in restaurants. This bill has an estimated fiscal note of approximately $320 million in fiscal year 2023, $782.0 million in fiscal year 2024, and $797 million in fiscal year 2025.

This week, the House Committee on Federal and State Affairs advanced Senate Bill 181 out of committee favorably for passage after amending the bill to exempt elevator inspection companies that are currently certified in another state. The bill would establish the Elevator Safety Act – a new state level regulatory scheme for all elevators, man-lifts, and conveyance systems. The bill would grant state inspectors the authority to adopt regulations over the industry and prohibit any inspections of elevators and conveyance equipment unless by a state-licensed company. Similar legislation adopted in other states increased costs on the grain industry substantially. The bill specifically exempts grain elevators, feed mills, and biofuel facilities. Kansas Grain and Feed Association and Renew Kansas Biofuels Association testified neutral on the bill so long as it was not amended to remove our industry exemptions.

This week, the House Committee on Agriculture held a hearing on House Bill 2560, a bill which would authorize the KS Dept. of Agriculture to extend current fees assessed on agribusiness without raising those fees. In addition, the bill would extend, to 2030, the existing water right transition assistance program (WTAP) administered by the agency. KARA and KGFA testified neutral on the bill and took time to explain to the committee that, while the bill does not increase any fees, the fees on agribusiness are currently higher than most neighboring states and the associations would oppose any attempt to increase the fees.

In 2020, the legislature passed the Eisenhower Legacy Transportation Program in Senate Bill 173. As a partnership between the public and private sector, the program established a $15 million, 3-year, cost-share program (70/30) and fund for maintenance and improvements to short line rail and rail siding. In 2020 and 2021, KDOT set aside a percentage of the $5 million program funds specifically for industry rail siding. This program has greatly benefited the Kansas grain industry. This year, the act directs KDOT to transfer $5 million to the short line improvement fund on July 1, 2022, which occurs within the state’s 2023 fiscal year. For this reason, your Association will work with KDOT and other stakeholders next session to seek an extension of this beneficial program.

This week, the Senate Tax Committee advanced Senate Bill 326 favorably out of committee. The bill provides an income tax credit for qualified railroad track maintenance expenditures of short line railroads and associated rail siding owners or lessees. Short line rail investments would qualify for a tax credit of $5,000 per mile of rail, up to 50% of the railroad’s annual total income tax bill. Rail siding would qualify for $5,000 per rail project. The bill was amended to limit the transferability of the tax credit to any eligible customer or vendor of the railroad. The tax credit would exist from 2022 through 2031, and the total value of the program could not exceed $8,720,000.00 in any given year. Various short line rail roads testified in support of the measure, along with Kansas Grain and Feed Association, and the Kansas Cooperative Council.

This week, the House Utilities Committees advanced HCR 5023 out of committee favorably. The Resolution, introduced by House Speaker Pro Tem Blaine Finch (R-Ottawa), denounces price gouging and market manipulation in the natural gas marketplace, and supports investigations into the extraordinary price increases of wholesale natural gas during the extreme cold weather event “Uri” during February 2021 that resulted in increased costs on ratepayers.

Kansas law prohibits the seller or lessor in any sales or lease transaction or any credit or debit card issuer from imposing a surcharge on a card holder who elects to use a credit or debit card in lieu of payment by cash, check or similar means. A surcharge is defined as any additional amount imposed at the time of the sales or lease transaction by the merchant, seller or lessor that increases the charge to the buyer or lessee for the privilege of using a credit or debit card. House Bill 2316 was introduced to eliminate this prohibition and allow the imposition of a surcharge. A hearing on the bill has been scheduled for Tuesday, Feb. 8 in the Senate Committee on Assessment and Taxation.

Last session, certain stakeholders requested the introduction of HB 2394, a bill which would establish a 6.5 percent research and development tax credit for LLCs and small businesses. Currently, Kansas law provides this tax credit for corporations only, and has a one-time transferability. The tax credit is based on the amount above the average of actual qualified research and development expenses in the tax year and the previous two tax years. HB 2394 would allow all taxpayers the ability to claim this tax credit and increases the initial tax credit calculation from 6.5 percent to 10.0 percent beginning in tax year 2021. The bill was referred to the House Tax Committee and it is rumored that the committee chairman will schedule a hearing on the bill soon.

Following decisive passage (32-7) last week in the Senate, a House committee this week worked through dozens of proposed amendments to Senate Bill 347 – the development incentives package for a manufacturing prospect that the state is racing to land. The legislation, which has strong support from Governor Kelly’s administration, is now possibly in limbo. House members sounded alarms over a number of provisions, including one added by the Senate to phase out the state’s corporate income tax for the business. The bill would enact the “Attracting Powerful Economic Expansion” act to provide for tax and other incentives to boost the state’s economic development. The bill would be the single biggest economic development bill in state history, with up to $1 billion in tax and other inducements to bring an unidentified business to the state. It is said the business would bring a $4 billion investment, build a 3 million square foot facility for a headquarters or factory in eastern Kansas, and hire at least 4,000 workers. The House Committee will continue deliberations next week.

Kansas has the highest energy rates in our region. Senate Bill 359 was introduced to help reduce those costs on rate payers by removing the state sales tax on utilities and granting the same authority to cities and counties. The measure is thought to have an elevated fiscal cost for the state. A hearing on the bill is scheduled for Tuesday, February 8 in the Senate Committee on Assessment and Taxation.

Last year, Governor Kelly signed into law a workforce development bill creating the Kansas Promise Scholarship Act. The Act provides educational scholarships to students attending a Kansas community college, technical college, or two-year associate degree program or career and technical education programs. The scholarship would be eligible for students pursing certain fields of study, including manufacturing, construction, and others. Senate Bill 340 was introduced to amend the act to authorize additional programs and fields of study. This week, the Senate Education Committee amended the bill and advanced it out of committee favorably as amended.

This week, the Senate Transportation Committee held a hearing on Senate Bill 379, a bill that would allow for the use and regulation of autonomous (driverless) motor vehicles in Kansas. Walmart and autonomous vehicle developer Gatik testified in support of the bill which would allow self-driving vehicles to traverse fixed business-to-business routes. The bill would also preempt cities or counties from establishing barriers to deployment of the vehicles. Forty-four states have created a framework for regulating autonomous vehicles, but Kansas, Missouri and Oklahoma are among six states without such laws. The bill would create a statewide policy for the regulation of autonomous vehicles and would restrict use of automated vehicles to movement between fixed points along repeatable routes.