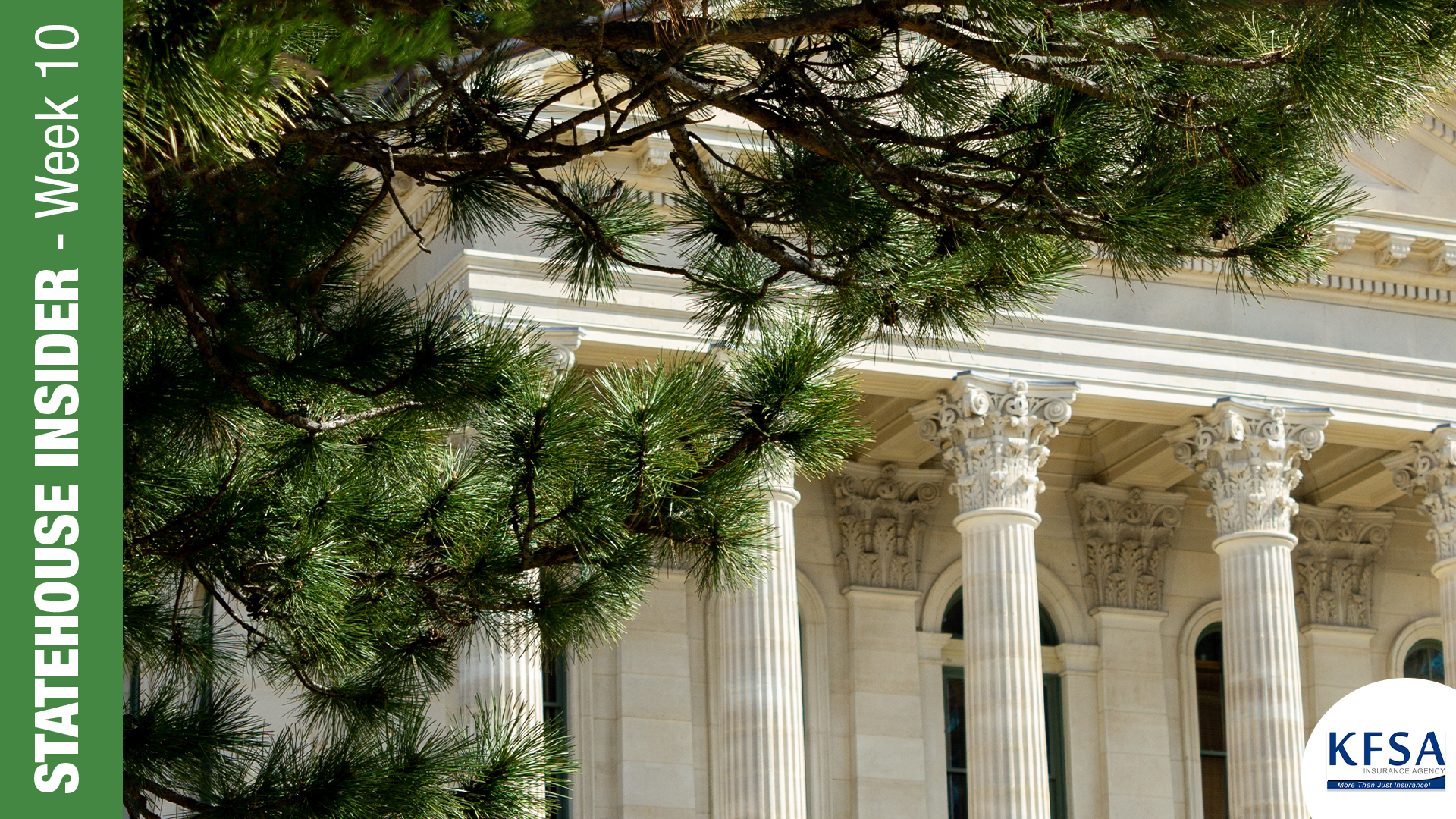 Posted at 10:21h in Advocacy by Editorial Team
0 Likes

It was a dramatic 10th week in the Kansas Legislature. Committees forwarded several bills and the major tax legislation of the year was presented to Governor Laura Kelly. As deadlines approach, the speed has continued to quicken. Friday was the final day for non-exempt committees to meet and consider bills for the year. The House and Senate are debating bills on the floor all day next Monday and Tuesday due to Wednesday’s deadline for all non-exempt bills to pass both chambers. Lawmakers are hoping for a short week before April 5’s first adjournment until April 30.

Tax Bill Presented to the Governor
On Tuesday, Senate Bill 22 was enrolled and presented to Governor Laura Kelly. The bill decouples portions of the Kansas corporate tax code from the federal corporate tax code following passage of the 2017 Federal tax cuts and jobs act. The House amended the bill to include language which reduces the state sales tax on food by 1 percent (to 5.5 percent). In order to pay for the sales tax reduction on food, the bill was also amended to require a tax on sales in Kansas conducted over the internet. The House amendments to the bill were intended to give the Governor a reason not to veto the bill, as lowering sales tax on food has broad support. The Governor, who has stated that she is not in favor of any tax cut bills this session, has 10 days to either sign the bill, veto the bill, or let it become law without her signature. Without action by the Governor, the bill would become law on Friday, March 29th. The bill was passed by the House on a vote of 76-43, and by the Senate on a vote of 24-16.

Senate Approves 2020 Budget
On Thursday, the Senate approved, on a vote of 21-18, a budget for fiscal year 2020 of $18.5 billion. The budget provides money to meet the Supreme Court order on schools, and $160 million for transportation. The budget does not fund a pay increase for state employees or judicial branch employees, as requested by the Governor.

Energy Rate Study Bill Passes out of House Committee
On Thursday, following a hearing on Tuesday, the House Utilities Committee passed out Substitute for Senate Bill 69, a bill which authorizes a study of retail rates of Kansas electric public utilities. The bill contains compromise language between energy consumers and utilities. This comprehensive rate study bill will help the Legislature determine what steps to take to lower rates. The bill would require the LCC to select an independent organization to evaluate electric utilities and include input from residential, commercial and industrial customers, as well as advanced energy stakeholders. The bill would establish the issues the study must address and would require Kansas electric public utilities to provide relevant information upon request. The intent of the bill is to provide solutions for the Legislature to consider regarding how to lower rates in Kansas, and make Kansas rates more competitive with the region. The bill now moves to the full House for consideration.

Bill Advanced on Escrow of Taxes Paid Under Protest
On Thursday, the House Taxation Committee passed out favorably House Bill 2340, a bill which would prohibit county treasurers from distributing the portion of property taxes that are in dispute for certain residential and commercial property when the taxes are paid under protest until the appeal process is final. The bill would apply to residential property with an amount of property tax exceeding the previous year’s amount by $500, and to commercial property with the amount of property tax exceeding the previous year’s amount by $5,000. Proponents of the bill included Representative Dave Baker, Kansas Grain and Feed Association, Kansas Agribusiness Retailers Association, Renew Kansas Biofuels Association, Kansas Soybean Association, and Kansas Chamber of Commerce. The bill was amended with agreed language between proponents and local units of government. The bill was amended to include appeal of the classification of machinery and equipment as a reason to trigger the escrow. The bill now moves to the full House for consideration.

Interim Commerce Secretary Hearing Turns South
On Wednesday and Thursday of this week, the Senate Commerce Committee held two days of contentious hearings on the confirmation of David Toland, Governor Laura Kelly’ nominee for Kansas Secretary of Commerce. Members of the Committee criticized Toland on multiple fronts, including partisanship and posts on social media by Toland’s staff that parodied Governor Brownback and a State Senator. On Thursday, the Committee voted to recommend that the full Senate not confirm the appointment. The nomination now goes to the full Senate for consideration, where the confirmation is now less than certain.

Economic Incentive Transparency Bill Advances
On Friday, the Senate Commerce Committee advanced favorably House Bill 2006. This bill would create a publicly available examination of economic development incentives for Kansas businesses, including tax credits and property tax exemptions of $50,000 or more annually. The bill would authorize the Legislative Post Audit Committee to conduct a systematic and comprehensive review and evaluation of each “economic development program,” every three years.  The Post Auditor would include in each report: 1) A description of the economic development incentive program; 2) An assessment of the program’s design and administration; 3) An estimate of the economic and fiscal impact; 4) A “return on investment calculation,” as that term would be defined by the bill; and 5) Other information as requested by the Committee. The bill will now be considered by the full Senate.

Net Operating Loss Extension
On Thursday, the House Taxation Committee passed out favorably House Bill 2388, a bill concerning the carry-forward of net operating losses against corporate income tax, and addition and subtraction modifications for property depreciation. This bill would have allowed net operating losses to be carried forward for 20 years, and allowed for a 100 percent deduction of the net loss. Currently Kansas law allows a carry-forward period of 10 years. The bill would also have amended the bonus depreciation guidelines by allowing the taxpayer to elect out of bonus depreciation at the state level, similar to current federal law. The Committee amended the bill to remove all portions of the bill except to allow net operating losses on Kansas businesses to be carried forward for twenty years at 80 percent. The bill was passed favorably as amended to the full House.

Counties Seek Constitutional Home Rule Protection
On Wednesday, the House Committee on Local Government held an informational hearing on House Concurrent Resolution 5007, which would amend the Kansas Constitution to grant home rule powers to counties. This power is currently reserved to cities. Proponents to the bill included the Kansas Association of Counties. Opponents included the Kansas Farm Bureau and the Kansas Livestock Association, arguing that this increase in local authority would be detrimental to agriculture as zoning laws would become more prevalent and burdensome to the industry.

Vocational Training Bill Advances
On Friday, the House Committee on Commerce, Labor and Economic Development advanced House Bill 2354 out of committee. This bill would allow student workers in unpaid, school-based vocational training and apprenticeship programs to be covered by the school district’s liability insurance.

Scrap Metal Theft Reduction Act
On Friday, the Senate Judiciary Committee advanced Senate Bill 219 out of committee after amending the bill (now Substitute for Senate Bill 219). As introduced, the bill would amend the scrap metal theft reduction act by assessing an excise tax on scrap metal at $1.00 per ton. The bill will also create the scrap metal data repository fund, and authorize the Kansas Bureau of Investigation to administer the program. The Committee amendments removed the excise tax and reduced the registration fee on scrap metal dealers to no more than $500. The bill now moves to the full Senate, but in order to continue to move forward proponents of the bill will need to secure approximately $180,000 from the state general fund to cover the costs of administering the program.

Center for Entrepreneurship Tax Credit
On Friday, the House Commerce Committee passed out favorably Senate Bill 90, a bill allowing financial institutions to claim the Center for Entrepreneurship tax credit beginning in tax year 2019. The bill would also increase the maximum amount of tax credits that any one taxpayer could claim from $50,000 to $100,000; however, the total amount of tax credits that could be claimed for all taxpayers would remain at $2 million per fiscal year.  This bill is supported by the Kansas Bankers Association and was overwhelmingly approved by the Senate. The bill now moves to the full House for consideration.

House Committee Advances Highway Bill
On Thursday, the House Committee on Transportation passed out favorably House Bill 2373, creating a transportation planning program (TPP) for the next state highway plan. The bill would direct the Sectary of Transportation to initiate a TPP to plan, develop and operate or coordinate the development and operation of the various modes and systems of transportation in the state. The TPP would provide for the construction, improvement, reconstruction and maintenance of the state highway system. The TPP would provide for the selection of projects, allowing for flexibility to meet emerging and economic needs. TPP expenditures may include, but are not limited to, preservation projects; expansion and economic opportunity projects; or, modernization projects.